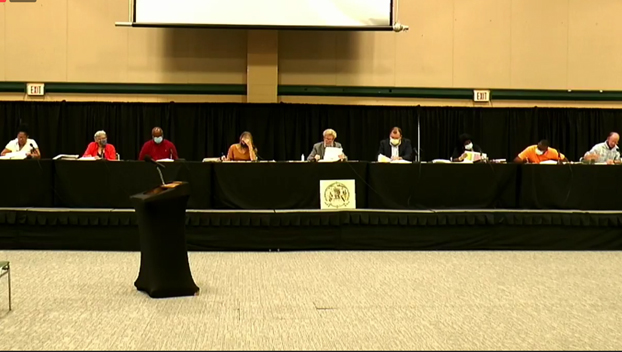 NATCHEZ — The Natchez Mayor and Board of Aldermen held a three-hour budget retreat meeting Saturday morning during which aldermen discussed city expenditures and budget proposals from the city’s department directors.

A video of the meeting can be found here.

“Aldermen, we do not expect you to be experts on this right now, and we are not saying we are doing all of this,” said Dan Gibson, Natchez mayor, as he presented highlights from the departments’ proposed budgets. “We are just getting everything on your sheets so then we can discuss it over the next couple of weeks and work all of this out.”

No action was taken on any of the budget proposals at Saturday’s meeting held at the Natchez Convention Center and streamed live on Facebook as the purpose of the meeting was to give aldermen a first look at proposed budget items, Gibson said.

Some of the highlights discussed for the budget included a recap of several bond expenditures carried over from past years.

“The bonds, there are several large ones, the largest is obviously for the building we are in now — the Convention Center,” Gibson said. “The good news is that that bond was refinanced four years ago and we are on track to have this building paid off and that bond retired by the year 2024.”

The next payment of $930,000 on the convention center bond, in addition to two interest payments of $67,341 each, is due in January, Gibson said.

“That will be in the new budget,” Gibson said. “We also have an upcoming bond payment on the Grand Hotel bond for the city’s participation in that back in 2008 and also a percentage payment in the Holiday Inn bond and that was in 2014 … and that is $35,000 with an interest payment of $8,887 and that will be due in September. Those are the city’s portion of bringing those projects into the city and getting them completed.”

The city also owes money on several vehicles including in the police and fire departments.

“There are a number of vehicles throughout the city that the city is paying on and these are fixed payments that have to be considered in our new budget,” Gibson said. “These mostly are already represented in the budget that will be expiring on Sept. 30, so there are no surprises there.”

Gibson ran down a list of the vehicles and total annual payments per department, including $40,612 for the public works department’s bucket truck, $35,089 for four Ford pickups and a Dodge truck and $84,918 for a street sweeper, excavator and tractor.

The Fire Department owes for a Chevy Tahoe, fire trucks and a training facility.

“I don’t have a total of all those figures but if you do the math, I think we are somewhere around half a million there,” Gibson said.

Gibson then recapped requests from city department directors who are asking for significant changes in their respective departments’ budgets, including a request from public works for two used vehicles to replace vehicles that are being used that are one year from becoming certified antiques, a request to add a parttime employee at $18,000 per year and an increase in the department’s oil and gas budget to accommodate an anticipated increase in the department’s work load.

Community Development Director James Johnston discussed the city’s portion of several projects funded through various state and federal grants, including ongoing Erosion Watershed Projects along the bluff, constructing a docking station Under the Hill to accommodate Viking River Cruise ships and a project to add heat and locker rooms to the city of Natchez swimming pool.

“We have now had work sessions on Tuesday on the revenue side, and today on the expense side,” Gibson said of the budgeting process. “All of these figures are being plugged in now so we will have a clean report to look at, and we will have another work session in the very near future.”

Gibson proposed the next budget work session be considered for preceding the Natchez Mayor and Board of Aldermen’s regular meeting on Aug. 25.