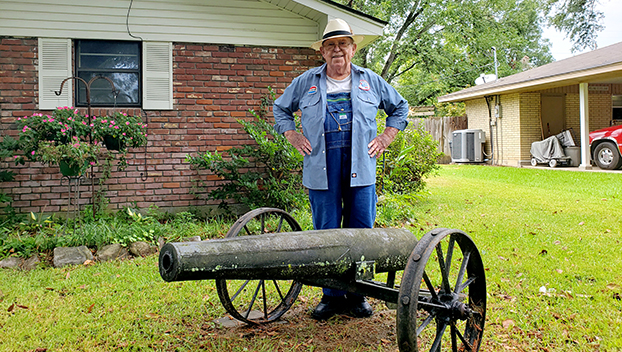 Joe Swoveland stand by the cannon built by his father in-law, who used to shoot it. “You could hear it on the other side of Natchez,” Swoveland said. (Sabrina Robertson / The Natchez Democrat)

VIDALIA — The owner of the only house on Willow Street with a working cannon in his front yard came to Vidalia in 1958 for work in the oil industry.

Joe Swoveland said it was the friendly people and the cleanliness of his community that made him stay.

When The Dart landed near his house on Friday, Swoveland reminisced about moving to Vidalia from Oklahoma as a 20-year-old newlywed to his wife of 62 years, Gwen Swoveland.

“Sixty-two years is a long-time,” Swoveland said of his Vidalia house. “I love living in Vidalia. It is not too big and it is a nice clean town. I’ve made a lot of friends here.”

The cannon in his front yard was welded together by Gwen’s father, C.L. Sturgeon, Swoveland said.

“He had a nice place at Deer Park, Vidalia Welding Service, and that’s were he built the cannon,” Swoveland said. “He used to shoot it. He’d place acetylene down in the back of it and pass a torch over the hole. You could hear it on the other side of Natchez.”

Now 82 and retired, Swoveland said he tries to stay busy by fishing and catching up with his old friends in the oil industry. Swoveland retired from Ashland Pipeline Company in 1995, he said.

“I used to go fishing a little but I enjoy working,” he said. “I’ve worked in the oil businesses my whole life.”

FERRIDAY — Rydell Turner has been elected Ferriday’s next mayor and two new aldermen have been elected along with one... read more