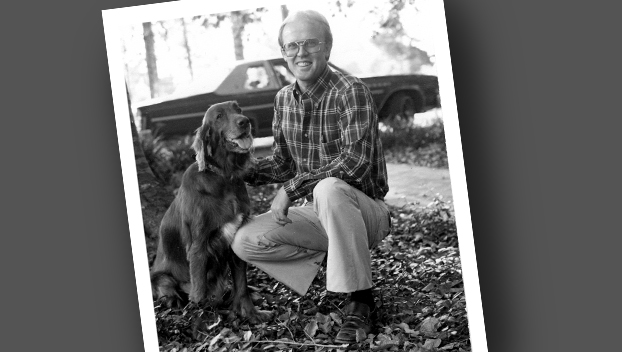 Danny Smith with his dog Flo, who would often accompany Smith to job sites. The photo was taken around 1980. (Submitted photo)

Natchez lost “one of a kind” with the recent death of Thomas Daniel “Danny” Smith.

“I met Danny when he was first packing tools and sweeping up for Dix Fowler,” Morgan said. “I had a good relationship with him all the years thereafter.”

Smith was best known for his work restoring historic buildings in Mississippi and Louisiana, most notably the complete restoration of Monmouth.

“What impressed me most about Danny — and I was impressed with many things about him — was as he progressed, he took an interest in the men who worked with him. I’ve seen him get them out of jail and actually pay for them to go to rehab and such,” Morgan said. “Maybe two years ago, Danny was talking about wanting to slow down, but said even then he was going to keep two or three of his men on in case someone needed something fixed.”

He said Smith’s first real challenge on his own was the restoration of Monmouth. The renovation was so extensive, Smith had to first get a dumpster and put it in the courtyard and cut trees and vines that had grown over the house.

“He was responsible for everything that was done there, from that until what you see now,” Morgan said. “It’s always a good mark when you do repeat work, and Danny did lots of repeat work. He kept about 10 or 12 men busy.

“He was a good, down-to-earth person, never pretentious. The best way to describe him was a good old boy. When he would call me, he said, ‘It’s old Danny boy.’ He was one of a kind. The ideal, Natchez kind.”

Patterson worked as a carpenter, “slash anything else he wanted. I was kind of his right-hand man,” he said.

Smith had an infectious passion for his work, Patterson said.

“He was so professional and he everything. He taught us how to be professional. When I went to work for Danny, I knew nothing about construction. About a year or two later, I felt comfortable doing any kind of construction work. The way he explained things — I enjoyed it so much because I enjoyed working with him,” he said. “He was such a stickler for doing everything right. To tell you the truth, there were contractors in this town who called him to ask him how to do things. People like him don’t exist anymore. He was the last. I don’t expect to ever meet anyone like him again.”