Rodeo renamed for Wayne Rabb on anniversary of his death 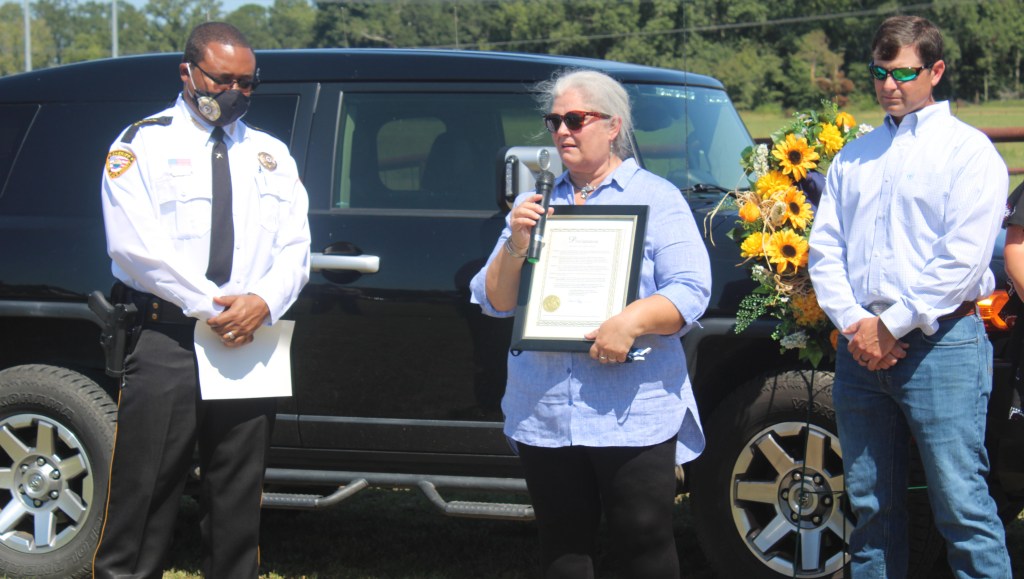 NATCHEZ — The Adams County Sheriff’s Rodeo is now officially named the Wayne Rabb Memorial Rodeo presented by the Adams County Deputy Sheriffs in honor of the late deputy who was a big proponent of the annual rodeo.

The name change took place during a Tuesday dedication ceremony attended by Rabb’s family members and Adams County Sheriff’s Office personnel at the site of the rodeo that is held annually at Johnson Arena on Foster Mound Road.

The ceremony was held on the one-year anniversary of the late chief deputy’s Aug. 18, 2019, death after he was stung by a wasp.

Rabb was remembered with the dedication of a black marble monument placed at the base of a flagpole in front of the Johnson Arena.

The rodeo, which is usually held in May, was not held this year due to the COVID-19 pandemic.

“When we didn’t have the rodeo in May, then we started planning for this ceremony,” said Annette Rabb, wife of Wayne Rabb. “As a family, we feel very blessed, honored, and we give thanks to God to everyone who contributes to the rodeo.”

Karren Ewing, ACSO employee and coordinator of the rodeo and who helped with organizing the dedication ceremony, said she worked with Wayne Rabb for nine years at the sheriff’s office.

Annette and Wayne Rabb were married for 46 years and both helped with the rodeo for 10 years. This year marked the 10th year for the annual rodeo even though the event was not held this year.

Bryan Rabb said the ceremony was special to him because of the kind words said about his father by Bishop Stanley Searcy, pastor of New Hope the Vision Center, Doug Broome, pastor of First Baptist Church Natchez, and Adams County Sheriff Travis Patten.

“The speakers talked about my dad being a Christian man, and he focused on doing what was right, showed everybody love and fairness,” Bryan Rabb said. “It was special for people to honor my dad’s character.”