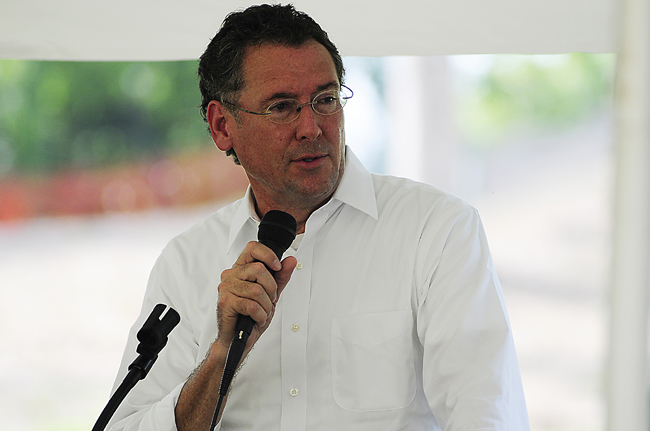 Gregg Harper speaks at an event in Natchez in this file photo from 2016. Natchez and Adams County are considering hiring the former 3rd District U.S. Representative as a lobbyist to help secure funds for the area. (File photo, The Natchez Democrat)

NATCHEZ — Natchez and Adams County are considering hiring a lobbying group to help the city and county secure funding in Washington, D.C., and Jackson for projects in the area.

Near the end of the Natchez Mayor and Board of Aldermen’s budget retreat meeting Saturday, Mayor Dan Gibson told alderman about the plan to consider hiring a lobbyist.

“In just a couple of weeks we are going to be considering a contract to bring on a lobbying firm for Natchez and Adams County and that individual is former Congressman Gregg Harper and his partner …” Gibson said. “They would be able to assist the city and the county in the area working in concert with Natchez Inc. on a number of projects to include funds in Natchez for the tire plant, for the clean up and also for the job training center that we had proposed, funds for Morgantown Road, funds for the docking facility.”

Gibson said the lobbyists could help secure funding for several other projects as well.

“If the city is going to succeed, you have got to have a place at the table, and it is important that we always have people on retainer who are always representing you in Jackson and Washington where the decisions are being made,” Gibson said. “Having been a lobbyist I will continue to be a lobbyist for Natchez. I will be lobbying in Jackson very shortly.”

Gibson said the initial proposal is for a contract with Harper, the former 3rd District U.S. Rep. of Jackson, that could cost anywhere from $3,500 to $5,000 a month that the city and the county share.

“I believe the proposal that is on the table now is that the city and the county would share in a cost of $7,500 per month for the remainder of 2020 and going to $10,000 a month in January,” Gibson said. “This contract would be worked through Natchez Inc. with the city and the county participating equally. So I wanted to make sure that was on your radar. I think we will have that discussion in our next board meeting (Aug. 25).”

During the Adams County Board of Supervisors meeting on Monday, board president and District 4 Supervisor Ricky Gray told supervisors he had discussed the proposal with Gibson.

“I think it is something we need to look at,” Gray said. “If it is going to get to the point where we can’t get funding for some of this stuff like Morgantown Road or whatever the case may be then we are going to have to end up fixing the road anyway and I just pray we don’t have to come out of our pocket with it. If we have somebody with the expertise of a former Congressman Harper, I know he still has some connections up there.”

Adams County Attorney Scott Slover said he had heard Gibson’s statements when he watched the Natchez meeting on the internet Saturday and he wanted supervisors to be aware of the potential contract as they are working on creating the county’s budget.

During discussion of the matter, District 3 Supervisor Angela Hutchins said she likes the idea.

“I don’t see any problem with it,” Hutchins said. “He (Harper) was always very helpful to this county and every time we have gone to Washington, he seemed to get the funding that we needed.”

District 5 Supervisor Warren Gaines, too, said he thought hiring the lobbying firm was a good idea.

“We probably need discussion, but we probably need to get the formal contract and let Scott (Slover) look over the formal contract and see what we are entering into but I think it will be great for Natchez,” Gaines said. “That will be one of our first projects for the county and city working together trying to make Natchez better. I think it will be a good thing for the community and I think it also will be a great start for us working with the city and the county together as long as our legal contracts and stuff are read over and rightly divided between the two.”

No action was taken on the proposal that supervisors said they would discuss at a later meeting.

“I think it is a win-win for Natchez and Adams County if we could get the former Congressman to lobby for us in D.C.,” Gray said.