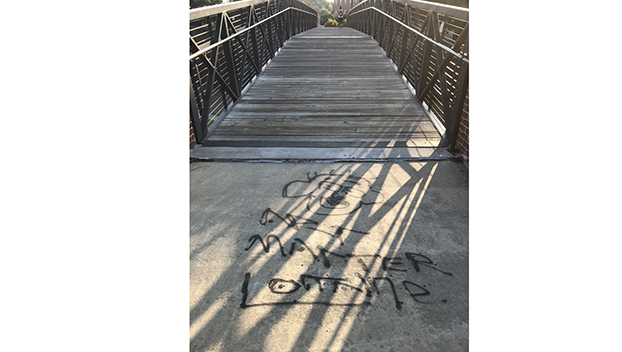 Over night Wednesday, someone spray-painted graffiti on the concrete at the south foot of the Bridge of Sighs. (Scott Hawkins / The Natchez Democrat)

NATCHEZ — Early morning walkers along the Natchez bluff were greeted with graffiti painted on the Bridge of Sighs on Thursday morning.

Natchez Mayor Dan Gibson said residents began texting him images of the vandalism before the sun came up on Thursday.

“Very sad … to report that our Bridge of Sighs on the bluff has been vandalized,” Gibson said Thursday morning. “We have asked our police department to investigate and our public works crew will be cleaning it up. If anyone has information please let us know.”

Public works crews worked all day Thursday and much of the day Friday to clean up the graffiti, said Justin Dollar, Natchez public works supervisor.

“We had to power wash it and we did remove what was on the public property,” Dollar said Friday afternoon.

“It is certainly very irresponsible on the part of the person who vandalized those areas,” Armstrong said. “We did collect some evidence, i.e., paint cans, spray cans. Hopefully, we will send them over to the crime lab to see if we can develop the perpetrators by way of DNA and fingerprints.”

Armstrong said investigators are searching for any video surveillance cameras in the area that might have captured the perpetrator or perpetrators.

“We have identified one camera that we are going to be looking at, and we are going to ask anyone who has any information of the perpetrators to give us a call,” Armstrong said. “It is certainly sad when someone goes around the city and vandalizes with graffiti on someone else’s property whether it be someone’s personal property or public property.”

Armstrong said the severity of the penalty depends on the damage done and the cost to repair the property.

“It can be a serious fine, and it depends on the cost it would take for recovery,” Armstrong said.

Anyone with information on the Wednesday night vandalism of the Bridge of Sighs on the Natchez bluff can contact the Natchez Police Department at 601-445-5565 or to report information anonymously Crime Stoppers at 601-442-5000.