Miss-Lou could end up between two hurricanes early next week; officials ‘on readiness level’ 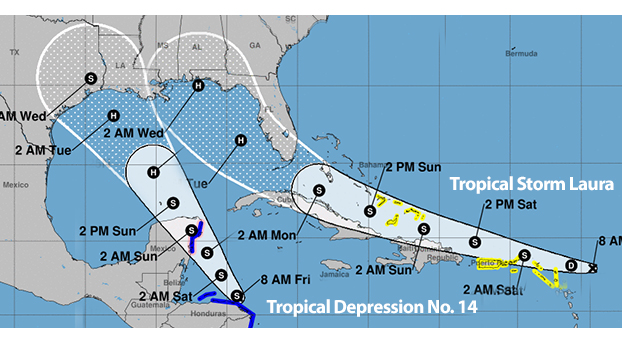 If the forecasts hold true, Miss-Lou residents could find themselves between two hurricanes early next week.

Adams County Emergency Management officials are keeping their eyes on two developing tropical systems — both headed toward the Gulf of Mexico.

Tropical Storm Laura formed Friday in the eastern Caribbean and forecasters said it poses a potential hurricane threat to Florida and the U.S. Gulf Coast. A second storm, currently called Tropical Depression No. 14 ,  also might hit the U.S. as a hurricane after running across Mexico’s Yucatan Peninsula.

Adams County Emergency Management Director said the weather system officials are most concerned about is Tropical Storm No. 14, which was nearing the coast of Honduras Friday morning. The U.S. National Hurricane Center said it was expected to veer northwest and cut across the tip of Mexico’s Yucatan Peninsula Sunday, possibly at or near hurricane force.

From there, the long-term forecast track would carry it to the U.S. Gulf Coast, perhaps Texas or Louisiana, by Tuesday or Wednesday — again, possibly, as a hurricane.

Bradford said forecast models would put Natchez and Adams County in the northeast quadrant of the storm, which if it were to become a hurricane would be the most powerful part of the storm.

Bradford said the county is beginning to make preparations.

“We have already started putting plans in place for the shelter as far as COVID-19 protocols are concerned,” Bradford said. “We have put everyone on readiness level.”

County road crews and Natchez Public Works have been notified to start prepping for the storm, Bradford said. Officials plan to meet on Monday for the latest update on the storms and weather preparations, Bradford said.

“Everybody needs to have a plan in place in the event of power outages,” Bradford said. “We have to anticipate for weather problems and be ready for it.”

Friday morning, Tropical Storm Laura was centered about 230 miles east-southeast of the northern Leeward Islands, with maximum sustained winds of 45 mph. It was heading west at 21 mph according to the U.S. National Hurricane Center.

Forecasters earlier described it as as a disorganized storm with a very uncertain future. The Hurricane Center said it might degenerate, or it might blow up into a major hurricane that could hit Florida by Monday or Tuesday and then the Gulf Coast.

The current forecast track, also highly uncertain, would carry it just north of Puerto Rico, the Dominican Republic and Cuba, across the Bahamas en route to the U.S.

The one we are looking at tin thenoreast quadrant – that is the most powerful/ Wwaether briefing on Monday.

We have already planned for shelter – set in place as far as COVID-19 shelters. Put everybody on readiness level. If we have.

Most of our road crews and public works, to fgo ahead and start prepping. Monday – Everybody needs to have a plan in the event of power outages. We have anticipate and be ready for it.