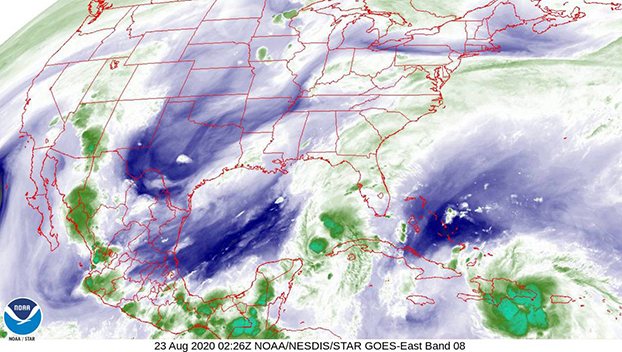 Mississippi Gov. Tate Reeves declared a state of emergency Saturday ahead of Tropical Storms Laura and Marco, which are headed into the Gulf of Mexico.

The dual threat places the state in a unique position.

“We are in unprecedented times,” Reeves said at a news conference. “We are dealing with not only two potential storms in the next few hours, we are also dealing with COVID-19.”

He and other state officials urged residents to prepare for the storms and, if possible, find places to evacuate that are not public shelters.

“You need to make plans early to do so. What we can’t have happen is if this thing is to strengthen on Sunday or Monday to have a mad rush of people to our sheltering space,” Reeves said.

Mississippi Emergency Management Agency Director Greg Michel said there will be more shelters available in coastal counties since occupancy rates will be lowered by half to two-thirds. People will not be turned away from shelters, but Reeves and Michel urged residents to find other places to wait out the storms.

Reeves said regardless of where the storms make landfall, coastal Mississippi should expect storm surge, so boaters should secure their vessels ahead of the storms. “Our coastal regions should expect anywhere from 3 to 5 inches of rain sometime next week,” Reeves said.

Both storms are forecast to strike the U.S by Tuesday or Wednesday. Marco’s path is heading toward Texas, while Laura has moved away from Florida and toward Louisiana, Mississippi and Alabama.

“We will be prepared for whatever these two storms bring us,” said Reeves. “Start preparing now. We don’t panic, but we do prepare. We prepare for the worst, pray for the best and expect something in between.”