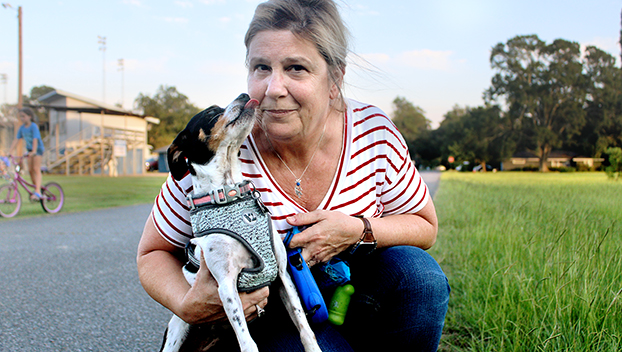 Delisa Blackwell holds her dog Mia, left, on their walk on Wednesday afternoon on Alabama Street in Vidalia. (Patrick Murphy / The Natchez Democrat)

VIDALIA —Delisa Blackwell has owned Mia, her rat terrier dog, for six years since adopting her in Eunice, Louisiana.

Blackwell said she walks a mile every day and that was what the duo was doing when The Dart landed Wednesday night on Alabama Street.

Blackwell said she owns another rescued rat terrier dog named Rivers but Rivers is not as energetic as Mia.

“Mia likes to chase Frisbees out in the field (near Alabama Street) and all of the neighborhood kids come and play with her,” Blackwell said. “I also take Mia out biking in a basket on my bicycle.”

Blackwell has lived in Vidalia for 36 years and Blackwell said she has always enjoyed being around dogs.

“I knew when I became older I needed a dog that was smaller,” Blackwell said. “I knew I wanted a sporting dog to keep me on my toes and Mia has done that.”