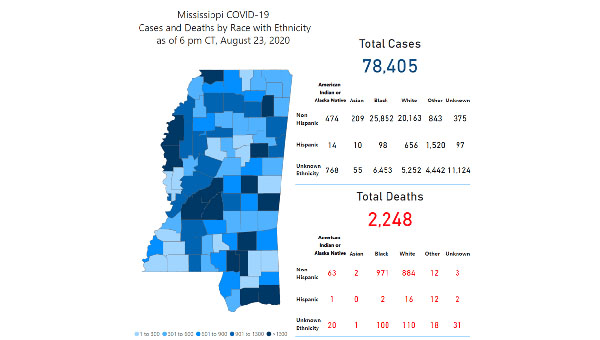 NATCHEZ — On Sunday, the Mississippi State Department of Health reported the largest spike of COVID-19 cases for Adams County to date and local officials said they are still awaiting more data to discern why.

Norma Williams, volunteer statistics coordinator for the COVID-19 Task Force, said Adams County broke its all-time peak with 25 new cases reported on Sunday by MSDH compared to the prior peak of 21 new cases set on July 19 and again on July 25.

Williams said Monday that the MSDH has yet to release any data about the age group of positive testers.

However, Williams said she suspects the increase may have stemmed from the reopening of schools and increases in social activities.

“I have no way of verifying (the cause) until we have that data,” Williams said.

Since MSDH started releasing information about the age range of positive testers by county in July, Adams County’s largest age group of positive patients has been between 18 and 29, Williams said.

Adams County Emergency Management Director Robert Bradford said it could be Tuesday before he could give a definite answer to what may have caused the recent uptick in COVID-19 cases.

“Right now I’m going through (the numbers) and it will probably be tomorrow before I can give a definite answer,” Bradford said, adding he didn’t know whether more school-age children tested positive, the general populous or people in nursing homes.

Williams said the rate of COVID-19 positive testers in Adams County has increased to 20.69% whereas before it lingered between 19% and 20%.

The positivity rate for the state of Mississippi is up to 39.8% as of Saturday where last week it was 19.1%, Williams said.

Adams County’s new COVID-19 cases rose by nine on Monday after Sunday’s peak report of 25 new cases for Adams County, according to the Mississippi State Department of Health’s Monday report.