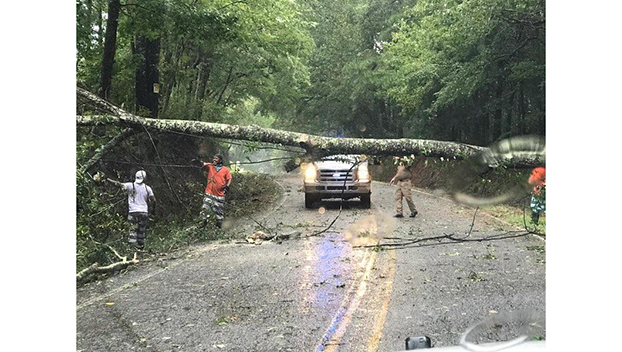 In Vidalia and Adams County, law enforcement officials said no storm-related injuries or deaths had been reported in the area as of 2 p.m. Thursday. Concordia Parish Sheriff David Hedrick said the storm may have caused a wreck with one fatality outside Ferriday.

According to data from Entergy, hundreds of Entergy customers in Adams County and Concordia Parish were still without power on Thursday afternoon.

Timothy Vanier, OEP director in Concordia Parish, said a major transmission line supplying power to Concordia Electric customers lost power during the storm. The company could not restore power to its customers until the transmission line is repaired. Vanier said he didn’t have an estimate for when the power would be restored.

Officials said several houses and buildings have also been damaged by strong wind and fallen trees.

Teri Vinson, who lives at 2161 Second Street in Natchez, said her son Matthew and brother-in-law Lonnie Vinson were sitting in the living room of her home, and she was in her kitchen when a tree from the backyard fell on top of the garage.

The fallen tree crushed Vinson’s car. Thick branches collapsed the roof of her front porch and punctured a hole above the china cabinet in her living room.

None of the Vinson family was injured.

“It was about 1:30 p.m. The weather had already eased up, and then the wind and the rain decided to pick up again,” Vinson said. “I was standing right by the refrigerator, and they (Lonnie and Matthew) were sitting on the sofa, and I heard a loud crash.”

Vinson said her car is totaled. She said she had made plans to stay with her brother-in-law until the damages to her house can be fixed.

“God was watching over us, and I’m grateful that no one else in the neighborhood got hit any worse than this,” Vinson said.

Merrill said people should avoid unnecessary travel so that no traffic accidents occur that could overwhelm first responders.

“We’ve had several trees down and several people without electricity. As far as I know, everyone is safe,” Merrill said. “We’re working around the clock to get the trees off of the power lines and get the power turned back on. For anyone who needs help or has any medical machines that need electricity, don’t hesitate to give us a call and we can figure out how to accommodate them. The Convention Center is open if anyone needs shelter. If you don’t have to get out right now, please stay in. Our emergency crews are out working, and we’re stretched thin.”

Armstrong said anyone who must drive should drive slowly and carefully on wet roads and keep enough stopping distance between themselves and other drivers.

Armstrong said those who see water, trees or power lines in the roads should call and report it.

“Our officers have been busy since they’ve come to work and are now assisting Entergy and work crews to get roads open,” Armstrong said. “There has been no one killed or injured and no injuries due to storm-related traffic accidents so far.”

Armstrong said a toppled AutoZone sign and a fallen tree on top of a church along Devereux Drive are some of the worst damages he’s seen from the storm.

“The sign at AutoZone is a testament to the amount of wind that came through,” Armstrong said.

“No one should attempt to move any trees themselves in case there are power lines nearby,” Patten said. “We made sure there were no power lines down in the area before we accepted any help. We appreciate all of the news teams for their reports and the first responders and citizens who helped get the roadways cleared up. There wasn’t a road that we’ve driven on today that didn’t have a tree down.”

Adams County Emergency Management Liaison Officer Neifa Hardy said any storm damages can be reported via the Adams County website at adamscountyms.net to be considered for storm relief funds.