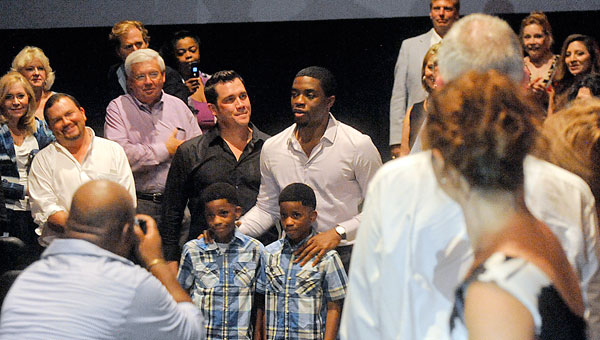 ‘Get On Up’ director Tate Taylor, star Chadwick Boseman and Natchez actors Jamarion and Jordan Myles address the audience inside the Natchez Mall theater. Tickets to the premiere were sold as part of a benefit for the Natchez-Adams County Humane Society. (Ben Hillyer/The Natchez Democrat) 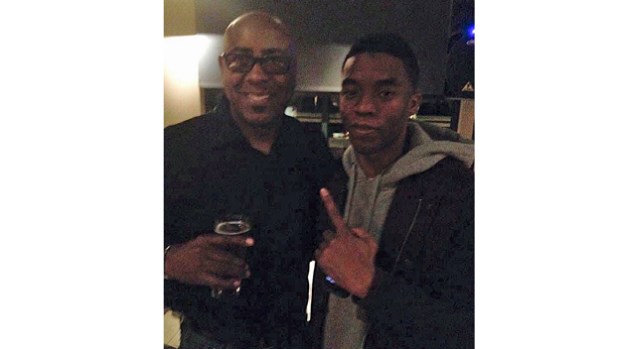 Natchez attorney Tony Heidelberg posted this picture on Facebook Friday after he learned of the death of actor Chadwick Boseman, whom he met when Boseman was in Natchez filming “Get On Up.” (Submitted photo) 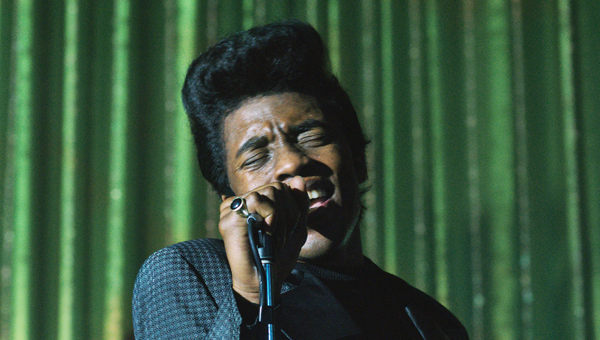 Chadwick Boseman portrays James Brown in the film “Get On Up,” which is set to release nationwide Aug. 1. (Photo by D. Stevens courtesy of universal pictures) 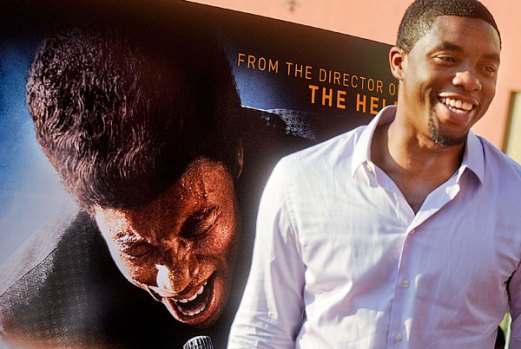 NATCHEZ — While many people regard “Black Panther” star Chadwick Boseman as a hero, the actor’s death also resonated with many Natchez residents who remember him as a nice guy from his starring role as James Brown in the film “Get on Up.”

The Tate Taylor film “Get on Up,” which was filmed in Natchez, was released in 2014 just one year after Boseman’s first starring role in the film “42” in which Boseman portrayed the baseball pioneer Jackie Robinson.

Taylor said he first met Boseman in Los Angeles while doing a screen test for James Brown the spring before filming.

What stood out to Taylor was Boseman’s natural talent to transform into another person while he was in character, Taylor said.

“He was such a talented actor he would never have been a caricature playing James Brown. He could transform. It’s a trick when an actor can make you forget who they are and they can become this whole other person that you think is them. It’s really hard to do,” he said.

Taylor said on-set Boesman was very professional. Off-set he was just fun to be around, Taylor said.

“Chadwick was just a ray of light,” Taylor said. “He brought the whole crew and cast around him up. He was all smiles and very fun and available to everyone. He wasn’t hiding in a corner. He was all love and happiness and talent.”

John Norris, who worked with Taylor on “Get on Up,” said Boseman became a dear friend to both himself and Taylor.

“Chadwick Boseman loved being in Natchez and Church Hill. He believed in what we were doing here. He loved our crew. He loved our locals and he loved Bobby J’s (restaurant). We’ll never forget our beautiful time together.”

Norris said he, Tate and Boseman traveled around the world together.

Norris said he and Taylor would fondly remember the long drive with Boseman in Italy outside of Tuscany on a writer’s retreat.

“We were trying to find directions to this tiny little town and Tate kept stopping and asking people but none of them spoke English. Chadwick was looking over at us saying, ‘We’re never going to get there.’ It was so funny.”

Norris recalled traveling to New York with Boseman after “Get on Up” and before “Black Panther” and people stopping Boseman on the street to say “You’re James Brown.”

“He was so proud of that,” Norris said of Boseman and the film. “He was a unique and bright soul. We were just heartbroken, both Tate and I. We were together when we found out. But I also know that we felt an immediate camaraderie with all of the people in Natchez and Jackson and Church Hill who had worked together with us on that movie. It was a special time for all of us here in Natchez who new Chadwick and who worked together. Having the rest of the cast of the crew and Mick Jagger here — it was a really magical time.

“Chadwick was about lifting people up and that was at our core as well. As Chadwick said in his commencement address at Howard, where he graduated, ‘All of the work that you do is not for yourself. It’s for those who come after you.’ He was just a really unique and amazing guy and I feel blessed to have had him in our lives. I feel the same way that everyone else in Natchez does who worked with him. He was a gift to everybody.”

Natchez attorney Tony Heidelberg said he met Boseman on the set of “Get on Up” in the opening scene where Boseman fired a shotgun inside of a building.

“I’ve never in my life met someone so versatile in how they acted. He played James Brown and he never got out of character but when you talked to him personally he was just the average Joe. He was not flashy. He was mellow, loved to blend in with people and never treated anyone like they were less than him. That’s what I loved about him,” Heidelberg said. “He was always a pleasant guy and could put himself into any character at any time.”

As they were filming, Heidelberg said he got to hang out with Boseman, Taylor and producer John Norris on the set and at their home in Church Hill.

“Chad and I exchanged numbers and as I’ve traveled sometimes we ran into each other. He was such a cool person,” Heidelberg said. “I did not know until about six months ago he had an issue with colon cancer. I’ve had colon cancer myself twice in the last five years and recovered from it so we shared that in common.

“I’ve been cancer free for about three years. When I saw a picture of (Boseman) about five or six months ago, it reminded me of where I was. His cancer was extremely progressive whereas mine was slow moving. I don’t know this firsthand but I just believe that with who he was and his character, he fought it and did everything he could to stay on this earth. But when God calls you home, no matter who you are or what you do, it’s just time to go home.”

Kevin Preston, co-owner of Magnolia Bluffs Casino & Hotel, said the hotel hosted functions for the cast and crew of “Get on Up” as it was being filmed.

Through his mutual friendship with Taylor and John, Preston said he also had encounters with Boseman and was devastated to hear of his death.

“Getting to meet (Boseman) and spend time around him was pretty special. He was such a sweet, sweet man and I was devastated to hear the news,” Preston said. “He was the salt of the Earth type of guy. We’ve always had great conversations. It’s heartbreaking to see someone that young with so much potential have such a short lifespan.”

Preston said his conversations with Boseman were less about film and more about the casino business and everyday life.

“He was really curious about the business and asked about the casino. He wanted to know more about other things and it was really cool to have conversations with him that didn’t entail the celebrity side of life. It was like talking to a close friend. He’ll be missed. I think he’s definitely made a huge impact from a movie aspect just with the stuff that he’s done so far.”

Taylor said Boseman’s illness was kept private. However, Taylor said he exchanged text messages with Boseman this summer in which they shared concern and well wishes towards each other during the COVID-19 pandemic.

“People would stop in their tracks in awe of him and just praising his work but he was so humble and available to everybody,” Taylor said. “(His death) was a shock to us like it was to most people. He was very private about it, which I understand. We had some text exchanges over the summer and that’s how I know that he knew we were with him. That’s why he didn’t need to tell us.

“It’s so easy for us to all be upset and tired over this pandemic — kids being home from school, not being able to go to restaurants and having to wear masks. Chadwick Boseman had Stage 4 cancer, fought it and made three movies. He continued to live on and persevere. That just shows us how ridiculously unimportant these little upsets are when you look at it from this angle.”