NATCHEZ — The Turning Angel monument got her wings back this weekend with a few final touches left until the statue is whole again.

Emily Ford of Oak and Laurel Cemetery Preservation in New Orleans said she and her assistant Corey Douglas arrived in Natchez Friday and worked through the weekend to piece the statue back together.

If all goes well, the Turning Angel should be her old self again by next weekend, Ford said.

“I’ve made some mortar samples to see what is going to match her color,” Ford said Sunday after the wings were reattached with epoxy and clamps.

The mortar will be used to seal off and protect the cracks where the Angel’s wings broke off when the statue was toppled in an act of vandalism in June.

Police arrested Austin Petty, 20, of Crosby soon after the incident. Petty reportedly climbed onto the statue at night and rocked it back and forth when it fell over onto its wings.

“With where her center of gravity is, the guy is lucky he wasn’t seriously hurt,” Ford said the statue that is estimated to weigh approximately 2,000 pounds. “She could easily have fallen the other way and landed on top of him.”

Ford said the repair process has gone smoothly so far with no major hiccups.

They began drilling pinholes to secure the pieces of the Angel’s wings back in place on Saturday, working from 7 a.m. until noon to beat the heat.

The process is tricky because a piece of the statue could break during the drilling, Ford said.

Matching the right color to the statue can be tricky, too, she said, adding the body of the Angel was washed clean but the part of the wings that broke off has not been cleaned and appears darker.

“There’s going to be a color differentiation for a while,” Ford said. “The pieces are going to wind up lightening up. … The hard part is done. She’s pinned together and now it’s just about filling up the repair joints.”

Ford said she would be back again next weekend to make the final touches, and repair some wear and tear that did not necessarily result from the fall. Ford works weekdays as the superintendent at the New Orleans City Cemetery. She earned her master’s degree in historic preservation and has been a cemetery preservationist for approximately 10 years. Ford has had her own restoration business in New Orleans for five years, she said.

“Elise (Rushing) called me and wanted several people to submit bids,” Ford said. “I have to say I was really impressed by the way they did their bid evaluations. They took it very seriously. There was a bunch of people involved and I know she called about specific materials.”

Before submitting her proposal, Ford said she drove up to Natchez from New Orleans to assess the damage.

“I had absolutely no problem coming here. I’ve been to Angels on the Bluff. The first time I’ve been to the Natchez City Cemetery was when I was about 10,” Ford said. “I wrote a book on Jewish communities up and down the Mississippi River so I’ve been up to Jewish hill a bunch and Elise let me into B’nai Israel. The drive is absolutely beautiful.”

The cost of the repair is a little over $3,000 plus travel and accommodations, Natchez City Cemetery Board President Elise Rushing said, adding the value of the damage would have been much higher had it not been for others’ kindness and volunteer services.

Others, including Dave Pace of Brookhaven Monument Company, his employees and Adolph Wagner of Church Hill volunteered to lift the monument back onto its pedestal, which would have been a big expense on its own, Rushing said.

Rushing said the cemetery board chose Ford to do the repairs because of her qualifications and not because of the price they were quoted.

Funding for the project was raised via mailed donations and online crowdsourcing on GoFundMe.com, which raised $17,734. Leftover funds will be used for security for the cemetery, Rushing said. 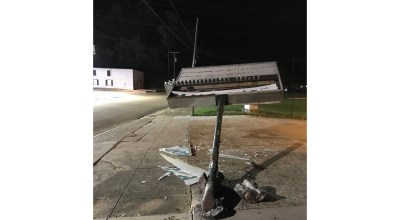 Chadwick Boseman, who starred as James Brown in movie…