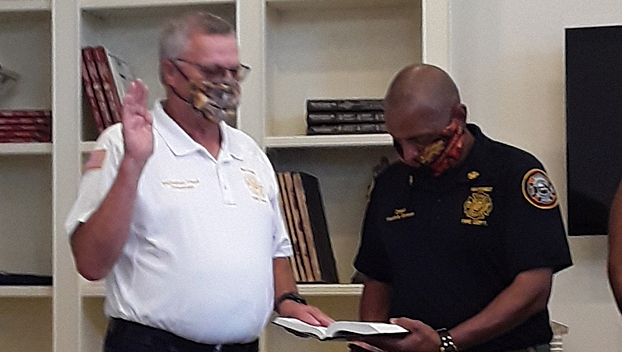 “We did choose battalion chief David Freeman to be the new interim chief during the transition while we search for a new chief,” said Dan Gibson, Natchez mayor. “He was sworn in.”

Gibson said he swore Freeman in over the telephone as Freeman and others gathered in a conference room at City Hall since Gibson is working from home due to being in the middle of a 14-day quarantine after being exposed recently to someone who later tested positive to COVID-19.

Gibson said he and others interviewed candidates last week and Gibson chose Freeman to be the interim chief until a permanent chief can be hired.

“Chief Freeman came highly recommended by Chief Green,” Gibson said of his selection of Freeman. “We actually interviewed two individuals. Chief Freeman has been with that force, I believe, 38 years. He has served at so many levels and he had just an excellent resume. Plus, he expresses such overwhelming support for the direction the fire department is taking for working with the community, continuing the upgrades that have been going on so we considered him to be an excellent choice for the interim chief.”

Gibson said, too, that Freeman is at a stage in his career where he is not interested in being the next full-time fire chief.

“We felt this would allow him the opportunity to provide leadership in the department while we search for the full-time chief that will succeed Chief Green,” Gibson said.

Freeman said it feels “sort of strange” stepping in to the interim chief’s role.

“I’ve been a field employee for a long time so it is sort of different,” Freeman said Monday afternoon after a 10 a.m. Monday swearing-in ceremony attended by Green, City Attorney Bryan Callaway, Ward 4 Alderman Benjamin Davis and some of Freeman’s family members.

Freeman, 65, said that while he is not interested in taking the job on full time, he is excited at the opportunity.

“I would like to at least see this end of it,” Freeman said. “I have been a field employee for most of the entire time. I made battalion chief about three years ago.”

Freeman also said he recently retired from AMR ambulance service after more than 24 years with that company.