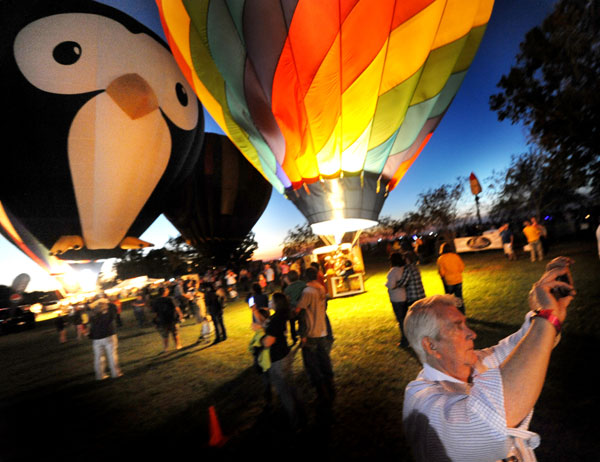 In the age of COVID-19 even hot-air balloons need social distancing.

On Tuesday, the Natchez Board of Aldermen approved its annual licensing agreement with Natchez Balloon Festival officials, giving the annual event use of the bluff along Broadway Street for the annual event, which is scheduled for Oct. 16-18.

In past years, most of the balloon festival took place on the grounds of the historic house Rosalie and not along the entire length of the bluff.

But this year is no ordinary year.

Because of the COVID-19 pandemic balloon festival officials decided not to use the traditional festival site and instead plan to spread out hot-air balloons along the entire length of the bluff in order to limit crowds and encourage social distancing.

“It is especially important to us this year, because we are not going to use the festival site at Rosalie,” Historic Natchez Foundation director emeritus Mimi Miller told the board Tuesday. “We hope to launch balloons, glow balloons and inflate balloons for tether rides on the bluffs.”

Miller said the balloon festival plans to conduct balloon glows on both Friday and Saturday nights up and down the bluff and in other locations throughout the city. Organizers have also planned a fireworks show over the Mississippi River. Other than tether rides, events during the weekend will be free to attend.

In order to ensure there is adequate space for the inflation of the hot-air balloons and for spectators to safely view the balloons, Miller said organizers want to make sure that the space is available and coordinated with other groups that are planning events along the bluff that weekend.

“We are willing to work with other groups that want to coordinate with us the use of that property,” Miller said.

Two events that are being planned are a Saturday celebration sponsored by the Natchez Grand Hotel and a shooting and archery competition called “Top Shot.”

The Natchez Grand Hotel is planning the “Four Elements Celebration” which is designed to celebrate “Earth, Fire, Wind and Water.” The Saturday event will include a variety of activities including kite making, a fire safety “show and tell” and a photography and Mississippi River painting competition.

Organizers of the “Top Shot” archery and shooting competition planned for the Friday and Saturday of the balloon festival hope the weekend event draws people to town who would not ordinarily come to Natchez. Margaret Perkins with Fusion Entertainment said the weekend will involve various skill competitions among registered competitors and would include using the north end of the bluff near Madison Street, which is not ordinarily used during the balloon race.

Perkins said gun-related events will happen at a private hunting club away from downtown and plans for archery events that include running and target shooting will be conducted safely using hay bales and other protections.

“This is something that is totally different from the balloon festival,” Perkins said.

Perkins said although people will be able to watch some of the competition, she doesn’t expect the event to attract big crowds.

Natchez Mayor Dan Gibson, in Tuesday’s board meeting, said the city is looking forward to a good balloon festival weekend.

“Obviously it will be different than in years’ past. Let’s pray for good weather so we can see some balloons in the air,” Gibson said.

“I am so happy we will get to have the balloons fly, even though we will not have all of the activities,” Smith said. “I think we will have a lot of people come to see the balloons and spend time in Natchez.”