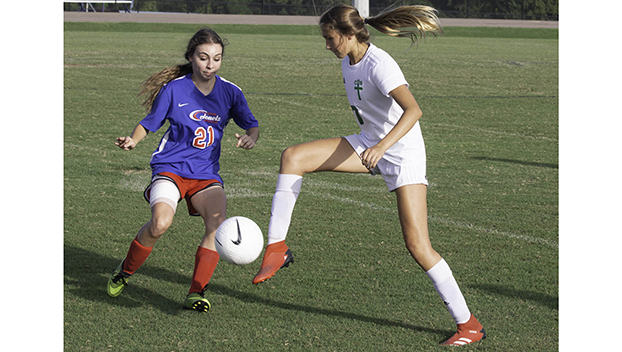 Sarah Gordon and Raegan Lea were the goalkeepers for the Lady Rebels who helped earned the second shutout victory of the Lady Rebels’ 2020 season. Lea had five saves while Gordon had two saves in goal. Jimmy Allgood, ACCS soccer coach, said he was proud of the team’s performance in Tuesday’s match.

“We have been practicing hard for two weeks and it was time for a soccer match,” Allgood said. “They came out and passed, communicated and trapped very well. My coaching staff was very proud of the display the ACCS soccer team put on in the match.”

The Lady Rebels (6-2, 2-1) traveled to face the Parklane Academy Lady Pioneers on Wednesday. Adams County’s next home match is at 4:30 p.m. on Monday against Cathedral High School.

Maddie Verucchi came up huge for the Lady Green Wave as she led the team with two goals scored. Dennis Hogue, Lady Green Wave soccer coach, said Verucchi’s first goal was due in part to good passing between teammates. But her second goal was a sight to see, Hogue said.

“Maddie dribbled the ball through five different opponents and was able to score,” Hogue said. “I was super proud of her. I told the team at halftime: ‘Look, Maddie scored the goal because she was composed, she picked her spots and she had nice touches.’”

Meredith Lesley kept the Lady Cougars from scoring with six saves. Hogue said Lesley made some great saves on a couple of shots on goal to prevent Brookhaven from scoring.

The next match for Cathedral (4-2, 1-0) was on Thursday night against the St. Aloysius Lady Flashes at St. Al. Cathedral will play its second South Region match of the 2020 season on Monday against ACCS. Hogue said the Lady Green Wave are going to focus on getting more players involved in passing the ball during practices to prepare for Monday’s match.