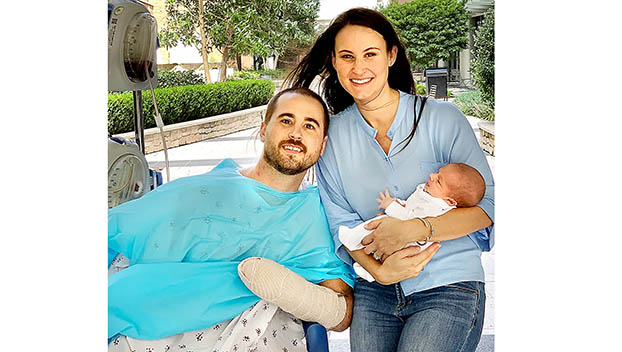 Wells Middleton, who suffered a welding injury, had a surprise visit from his wife Lacey and newborn son Levi at Our Lady of the Lake hospital in Baton Rouge. (Submitted photo)

A work-related accident on Aug. 6 caused a Natchez man to lose eight fingers and miss the birth of his second son during a month-long hospital stay.

However, Wells Middleton said the blow of this past month was softened by the kindness he received from others.

Wells, who worked as a welder, prefers not to focus on the details of the accident, but rather celebrate the positive things that have come from the incident.

A GoFundMe page started by a friend of Well’s family, Natalie Dunn, had raised over $57,000 as of Friday to assist his family with medical expenses and hardship.

Wells had to undergo multiple complex surgeries on both hands, including reconstruction of one of his thumbs, he said.

Wells said on Tuesday he will have had his 12th surgery to repair the skin on his hands and arm.

On Sept. 4, he was finally released from Our Lady of the Lake hospital in Baton Rouge to be with his wife Lacey and sons — Conrad, age 3, and Levi, who was born Aug. 13.

A little more than two weeks after Levi was born, Wells got to see his newborn son in person for the first time, he said.

“Mentally, I had to stay as strong as possible. Friends from high school and my wife would Facetime with me,” he said. “There were some times I would have visitors but I could only have one person in the room with me. My mom and dad stayed with me at different times. My wife got to stay with me twice.”

On the morning of Sept. 1, Wells said his mom woke him up early for “physical therapy,” which was a fib she told to get him out of bed and to brush his teeth, he said.

“I had been in the hospital going on a month and knew physical therapy didn’t come that early.”

Wells said the events of the morning should have been clues that something funny was going on but he never questioned them.

John Deshotel, RN, who is Wells’ case manager, ordered a wheelchair so that he and Wells could go to the first floor.

“That’s not his job,” Wells said, adding he was excited for a change of setting. Wells had only been on the surgery, trauma and rehabilitation floors.

“John takes me around to the garden and he said, ‘Hey, someone is having a party down there … want to go crash it?’ I said yeah, absolutely,” Wells said.

As Wells and Deshotel came closer to “the party” Wells noticed it was actually Lacey holding baby Levi for a surprise visit with his dad, he said.

“I was bawling. It was unreal,” Wells said. “I pray everyone at some point in their life gets to feel that emotional happiness that I got to feel that day.”

Lacey said the month with Wells in the hospital and her at home was “a new adventure” for her.

“With a newborn and a 3-year-old … it’s a lot,” Lacey said. “I have a lot of friends and family who have helped me but it’s different not having your husband there.”

It is still unclear how long his road to recovery will be, Wells said, adding it could take years. He has one skin graft surgery Tuesday and another surgery planned for six months later.

“I feel good. There’s still some pain but mentally I feel good,” Wells said. “I enjoy Our Lady of the Lake. I was in a lot of pain and there were times I would be full-blown crying but the nurses took very good care of me. The challenge for me now is watching her (Lacey) do everything and not being able to help.

“For her, I’m sure it’s having to do everything and take care of Conrad, Levi and me. She’d tell you it’s not a problem at all because she’s so headstrong. I’ve learned to let a lot of the little things go, stuff that used to aggravate me, and not to stress over the small stuff anymore.”

Wells said he experienced waves of emotion and gratitude every time his mom updated him in the hospital about the GoFundMe account.

“I never dreamed anyone would do that for my family and me,” Wells said. “On TV, all you see is bad stuff happening. When something like this happens and you see people giving to you the world doesn’t seem bad at all. It makes me so proud of Natchez and our little community. Personally, I wish I could thank every person that gave money or prayed for us. I wouldn’t accept another 50 cents.”