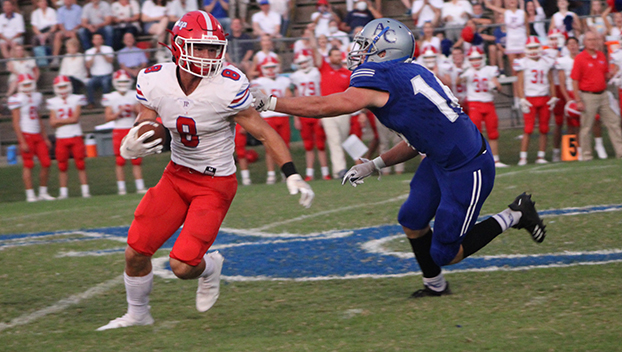 NATCHEZ — The Adams County Christian School Rebels will look to get back on the winning track Friday night when they play host to the Copiah Academy Colonels.

This will be the MAIS District 3-5A opener for ACCS and the first official on-the-field district game for Copiah Academy. The Rebels are coming off a rough 42-8 home loss to Jackson Preparatory School that dropped them to 2-2 overall.

Even though the total yards were probably closer than expected — 280 for Jackson Prep and 238 for ACCS — the Rebels were done in by five turnovers. Even though senior quarterback VJ Knight threw two interceptions, he also connected with Claven Dunbar on a 65-yard touchdown pass. Knight threw for 147 yards and was also the team’s leading rusher with 76 yards on 11 carries. Senior running back Corey Sewell was held to 20 yards on nine carries.”

Copiah Academy picked up a forfeit 18-0 win over Central Hinds Academy to go to 3-1 overall and 1-0 in the district after the Cougars canceled what was supposed the district opener for both teams.

The Colonels’ last actual game was on Sept. 4, when they traveled to Mendenhall and upset Simpson Academy 36-14. Senior quarterback Ellis Fair had three rushing touchdowns and a long touchdown pass to senior wide receiver Torriq Cooper. They shut out the Cougars 22-0 in the second half of that game.

“They like to run the ball. They’re a run-heavy team,” Swilley said. “Get better play out of our offensive line. Conditioning to play four quarters of football. After a game like Prep, everybody’s sore.”

As for the keys to victory, Swilley said the Rebels need to play physical football for four quarters against a Copiah Academy team that he said is a better overall team than it was last year.

“Taking the mentality to driving them down and making them tap out. We’re a big, physical team. We’re not going to throw the ball all over the place. We want to pound you. If we can hold on to the football, I feel like we can win the game.

“They’re better at key positions. Their quarterback (Fair) carries the ball a lot. He can throw it. Their running backs are good,” Swilley said. “We’re better at stopping the run than we are at stopping the pass. They’re a run-heavy team. We match up pretty good with them.”

“For me, I love the fact that we go out of our way to have a big show and honor those people who fought and died for what we do,” Swilley said. “Personally, my best friend is an Afghan vet. My father is a Vietnam vet. As a school, we should show our appreciation for those who fought for our freedom. Football on Friday nights, it doesn’t get any better than that. Now what we’re going through as a nation with COVID-19, we’re fortunate as a school to be able to play football when other schools cannot.”

Kickoff is at 7 p.m. on Friday at Bobby Marks Stadium at ACCS.

NATCHEZ — The team of Dr. Jeff Anderson and Casey Ham played a solid round of golf Sunday afternoon while... read more