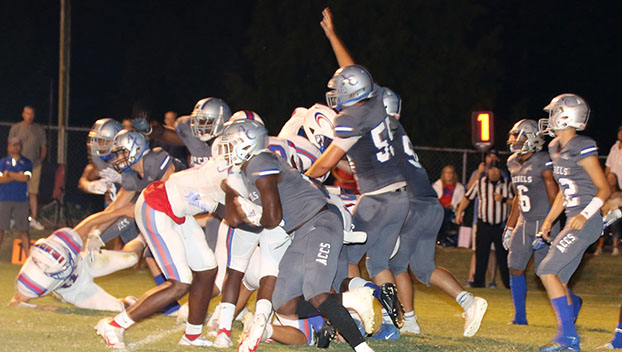 And somehow against a good Copiah Academy team, it worked. Corey Sewell had 162 yards and two touchdowns on 25 carries and Blake LaPrairie had two touchdown runs of his own as the Rebels pulled away for a 43-27 win over the Colonels to stay undefeated in an MAIS District 3-5A game at Bobby Marks Stadium.

That would be their last lead of the ball game. Sewell had touchdown runs of 20 and 14 yards and ran in for two-point conversions after each TD run and just like that ACCS was ahead 22-13. Copiah Academy made it a 22-20 game on Fair’s 61-yard touchdown pass to John David Weed with 1:36 left until halftime, but the Rebels responded when Dantavious Stampley returned a fumble 70 yards for a touchdown with 36 seconds left and Nolan Owens’ extra point gave them a 29-20 halftime lead.

Fair connected with Nictoriunte Buie on a 68-yard touchdown pass with 10:30 left in the third quarter to trail 29-27. Once again, ACCS had an answer as LaPrairie, who had five carries for 52 yards, scored on a 30-yard run to give the Rebels a 35-27 lead. LaPrairie scored on a four-yard run with 9:27 remaining in the ball game and Sewell ran in for the two-point conversion.

The key play of the game occurred in the third quarter when Copiah Academy (3-2, 1-1) picked off a pass and returned it 75 yards to the Rebels’ 4-yard line. That’s when the intercepting player was hit and the ball came loose at the 6-yard line, where ACCS’s Colin Cauthen recovered it. The Rebels wound up marching down the field 94 yards for a touchdown.

Stampley also had a team-leading nine tackles while Sewell had six tackles and one interception. LaPrairie as well as Kyron Barnes each had five tackles and Decobus Jackson had four tackles.