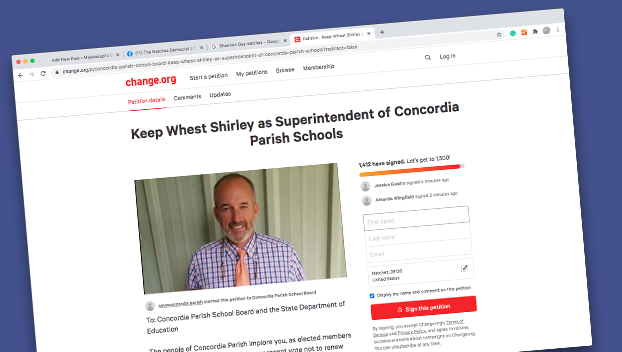 VIDALIA — More than 1,300 people have signed an online petition imploring the Concordia Parish School Board to reconsider its recent vote to not renew the contract of Superintendent Whest Shirley.

The petition was started on the website Change.org Monday by the group Save Concordia Parish.

Save Concordia Parish members Destiney Robb and Pam Clayton said they were approached by several concerned citizens in the community for help after Shirley’s contract was not renewed during a special called meeting by the school board on Aug. 24.

During the meeting, five out of the nine board members voted against extending Shirley’s contract through the school year. The vote was taken after the contract was discussed in executive session. Board members have not offered a public explanation for their actions and plan to begin a search for a new superintendent.

“Whest Shirley’s contract will end on December 31, 2020, putting Concordia Parish Schools in a tough spot, especially considering we are in the middle of a global pandemic,” the petition says.  “Our teachers and students need steady leadership now more than ever.”

Robb and Clayton said they did some research online when the possibility of a petition was suggested by some of the concerned citizens and helped set up the petition online.

The petition lists any of Shirley’s accomplishments as superintendent, including addressing the challenges brought on by the current global pandemic.

“His leadership has never been more exemplified than in his response to the virus. Following the advice of the state, schools were closed in March of 2020, as the state went on lockdown to ‘flatten the curve’ of coronavirus,” the petition says. “During these unprecedented times, Mr. Shirley continued to work and plan for the future of our schools.”

The petitions says Shirley has proven himself as an effective leader and that the recent actions of the board deserve to be reconsidered.

Shirley said he was surprised Monday evening when he was first contacted about the petition and doesn’t know much information about who started and why, other than the information available online.

Several of the people who signed the petition also left comments about why they decided to sign the contract in support of Shirley.

“Wes has been the best superintendent in Concordia Parish in many years!” Sabrina Stuckey wrote. “The board members who voted against him cannot produce a valid reason for his dismissal. This make one wonder if their reasons are personal. If that’s the case they are not justified.”

Some pointed to the timing of the board’s actions.

“I believe there should not be a change in this position during a time of transition and challenges that face our school system,” Derinda Smith wrote.

Concordia Parish School Board President Fred Butcher said he was unaware of the petition Tuesday and could not comment on it until he has read it.

Robb said the group has been tentatively approved for putting the petition on the agenda for  next month’s school board meeting and plans to deliver a letter to the school board for official approval Wednesday.