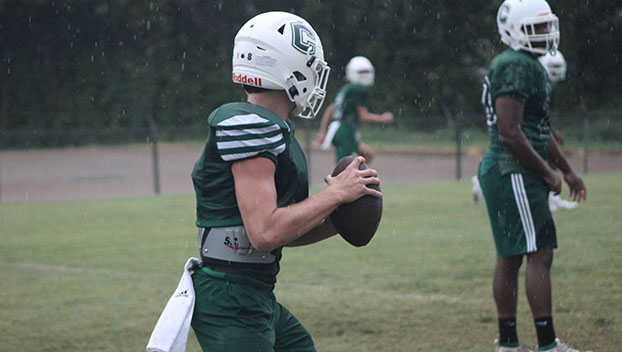 The Green Wave are on a five-game winning streak coming into Friday’s game. Cathedral won 27-17 over Brookhaven Academy in a Midsouth Association of Independent Schools District 4 last Friday night.

“It is a very important week as we have the district title on the line and potentially the No. 1 seed in the Class 4A playoffs,” said Chuck Darbonne, Cathedral High head coach. “Our players have a lot of confidence and the coaching staff have put our players in the right situations to be successful and the players have responded. To win this game, we have to be the more physical team and that is something Riverfield has been good at for years. If you are the more physical team in any matchup, then you have 90% chance of winning games.”

One of the keys to Cathedral continuing its winning streak is stopping Riverfield Academy’s running game. The Raiders (4-1) ran for 372 yards in a 44-9 victory over the St. Aloysius Flashes last Friday night. Hudson Brakefield and Trent Ginn are key players for the Green Wave to stop on defense. Brakefield ran for 245 yards on 20 carries and scored three touchdowns against the Flashes while Ginn ran for 97 yards on 16 carries with two rushing touchdowns. Darbonne said the players have a good understanding of what Riverfield can do: be physical and run the ball.

“We focused on a lot of tackling, making sure we are lined up properly and how to defeat a block easily on defense during practices this week,” Darbonne said. “We focused on more where to be and what to do when you actually get there.”

One of the key players to watch on Cathedral’s defense is KJ Washington. Washington led Cathedral with six tackles in last Friday’s 27-17 victory over Brookhaven Academy. Washington said he has focused on taking better steps and reading the guards faster.

Bryson Moore is one of the key offensive players on Cathedral’s squad to watch in the game. Moore ran for 180 yards on 34 carries with two rushing touchdowns. Moore said he has focused on trying to hit the right gaps during practices this week in preparation for Riverfield.

“If I run for a good bit of yards, then I could tire the Raiders’ defense down and we can make plays off of my running game,” Moore said.

Cathedral will honor Lt. Col. Andrell Hardy for his military service before the game. He retired from the United States Army in March of this year after 21 years of service. Hardy will be given a football signed by the Cathedral football team.

“This is the first place I have been at that has a specific game to honor the military and it’s great to be part of,” Darbonne said. “I have many friends and relatives that have served for our country in the military.”

The festivities for military appreciation night begins at 6:45 p.m. on Friday with kickoff at 7 p.m. at D’Evereaux Stadium.