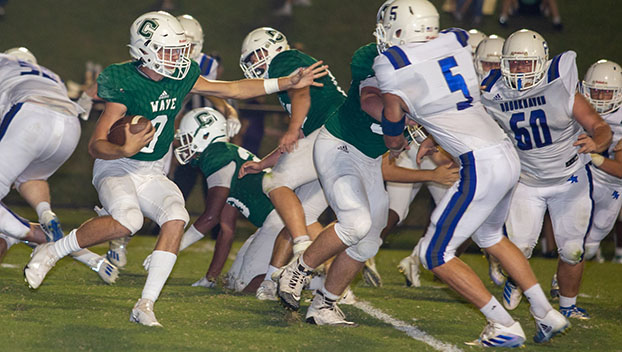 NATCHEZ — Cathedral High School head football coach Chuck Darbonne will be looking for a much better outcome Friday night when the Green Wave travels to Clinton take on the Clinton Christian Academy Warriors.

Kickoff between Cathedral (5-1) and Clinton Christian Academy (0-5) will be at 7 p.m. The Green Wave is coming off a tough 37-8 loss at home to defending MAIS Class 4A state champion Riverfield Academy in which it they would have won the District 4-4A championship.

Now the Green Wave turns it attention to a Clinton Christian team that is 0-5 overall this year, but gave Cathedral everything it could handle last year at D’Evereaux Stadium. The Green Wave escaped with a 57-36 win.

In that game, the Warriors racked up over 400 yards of total offense, but three turnovers proved to be costly.

“They have good skill players, receivers and running backs. Most of them are back this year. They can make some big plays,” Darbonne said. “Our kids have some good experience because we played them last year. Our kids have a working knowledge against some of their players and know what to do to stop them.”

While Cathedral did have a game last week, Clinton Christian last played on Sept. 18 — a 56-6 loss at home to Bowling Green School.

Cathedral will need to do a lot of things better Friday night than it did against Riverfield to pick up its sixth win of the season.

“Winning the turnover battle, first and foremost. Knowing our assignments is key. Being the more physical team,” Darbonne said. “Eliminating the penalties. They seem to be bogging us down the last couple of weeks.”

Darbonne added that quarterback Noah Russ needs to play better than he did last week.

“We’re working on finding more consistency in what we’re doing. Operating the offense more efficiently. Finding some things we can be more successful with. Move the ball like the way we did the first five game,” Darbonne said.

CENTREVILLE — The Centreville Academy Tigers will look to extend their winning streak to three in a row when they travel to Bay Springs to take on the Sylva-Bay Academy Saints in an MAIS District 3-3A game Friday at 7 p.m.

Centreville is coming off an impressive 46-16 homecoming win over Porter’s Chapel Academy to go to 3-2 overall. The Tigers are also 1-0 in district play after a 38-22 win over Amite School Center two weeks ago.

Meanwhile, Sylva-Bay Academy is 0-6 overall after North Delta School rallied in the fourth quarter for a 49-38 victory. This is the first district game of the season for the Saints. In 2019, they went to Centreville and defeated the Tigers 28-16 on their way to winning the district championship.

A win over Sylva-Bay Academy will put Centreville Academy in the driver’s seat for the District 3-3A championship.

Among the standouts for the Tigers to watch for on offense are quarterback Peyton Jones, running back Kason Clark and wide receiver Ben Garrett. Jones connected with Garrett on two touchdown passes while Clark had three touchdown runs last week.