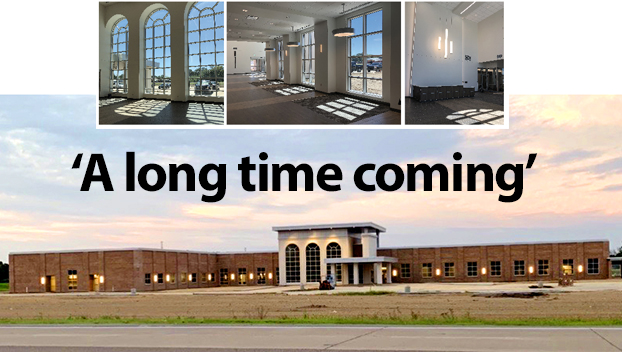 RIDGECREST — The construction of a new $36 million hospital in Ridgecrest is nearing completion, hospital officials said.

The Riverland Medical Center hospital and its other medical facilities in Vidalia and Ferriday are being rebranded as Trinity Medical as the hospital makes its transition into a newer, larger facility on U.S. 84.

All of the hospital staff at Riverland Medical Center — along with some newly hired hospital workers — will be moving into the freshly built Trinity Medical possibly by early to mid-December, said Brandy Spears who is the head of marketing for Riverland.

The move-in date is contingent upon the Louisiana Department of Health completing a survey of the new facility and issuing a license to open it — which should begin in November following the final construction phase of the project, she said.

“Right now we have our architects doing a final walkthrough to point out any touch-ups or repairs and needed by our contractors. The construction should be complete within the next 10 days of the final walkthrough,” Spears said.

The next steps are landscaping and installing external and internal signage, furniture and equipment, she said.

Jim Graves, chairman of the Concordia Parish hospital service district, said the process to fund and build a new public hospital began in the latter part of 2016.

“We had a few of our doctors, Dr. Lee England being one of them, come to us and asked us to pursue building a new facility,” Graves said. “Our hospital is 57 years old. So we applied for a new hospital through the USDA and got all of our politicians involved in it. It has taken us a few years to get it going.”

Adam Probst, vice president of the Concordia Parish Police Jury, District 3-A, was also a member of the previous administration when the hospital board brought the idea of building a new hospital to the Police Jury.

“It’s great for the community and a good asset for the economy. It’s been a long time coming. It brings people to the Ferriday community from out of town and hopefully it will be a boost to that economy once it’s up and going and other food places and pharmacies will follow,” he said.

“If it weren’t for her, this project never would have gotten off of the ground and we would not be where we are now,” Graves said. “There are several critical access hospitals trying to be built right now and they’ve been delayed for one reason or another. (Castille) was instrumental in getting us past all of that.”

Out with the old, in with the new

Graves said the hospital would be equipped with all new furnishings and equipment.

“Everything in the hospital is brand new. We’re not taking anything with us except patient records. … It’s unbelievable how it looks. It’s so much different from where we are now. It’s very patient friendly and our employees are going to be able to get around a lot easier without tripping over one another,” he said.

“What we’re most excited about is our emergency room,” she said. “We see approximately 900 visits a month through our ER now. We are, at a minimum, increasing that space times five. … Each room is going to be a lot more spacious which will allow more nurses to work more efficiently.”

Apart from its emergency space, Trinity would also have an intensive outpatient program housed in a separate building behind the medical office.

Outpatient physical therapy, located inside the medical office building, will be a wide-open space with large windows facing the highway, Spears said. Trinity’s office building will also have a new medical clinic with eight exam rooms and two procedure rooms.

“We’re hoping to have a rural health clinic there with a nurse practitioner or mid-level provider and specialists rotated through,” she said.

The new cafeteria is also designed for guests to eat breakfast or lunch at their leisure once COVID-19 visitor restrictions are lifted.

Spears said Riverland is already working to fill anticipated positions, which are posted at riverlandmedical.com/careers/applications.

“I’ve been posting job availability as we go. We’re trying to fill anticipated positions now and as we go through the next couple of months so we will be fully staffed once we go into the new building.”

Both clinics will remain in their current facilities and the main phone number for the hospital and clinics will not change.

The opening of a new hospital comes at a significant time amid the COVID-19 pandemic, Spears said, adding new equipment, larger facilities and a larger medical support team can only be beneficial in a public health crisis.

“We’ve done OK since the pandemic started. Like every hospital across the country, we’d initially gone to emergency cases only. Over the past couple of months … all of our elective procedures are finally coming back. We’re excited to bring such a wonderful new facility to Ferriday,” she said.