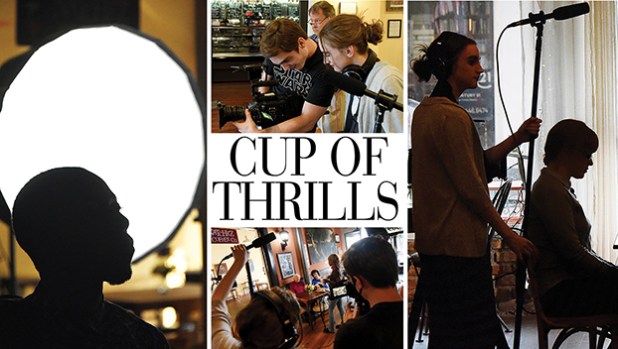 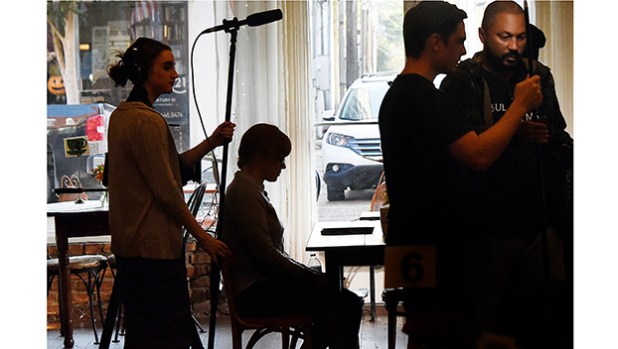 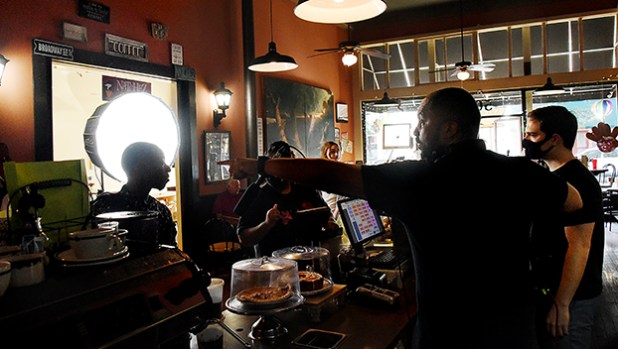 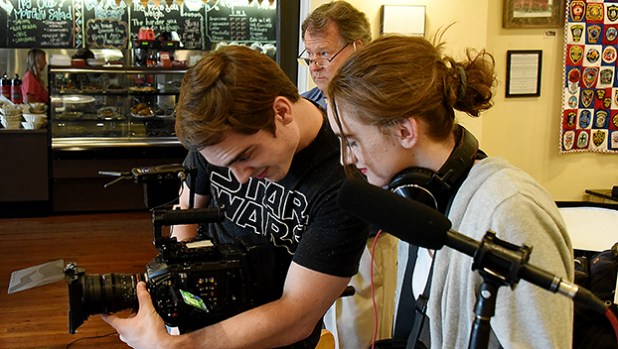 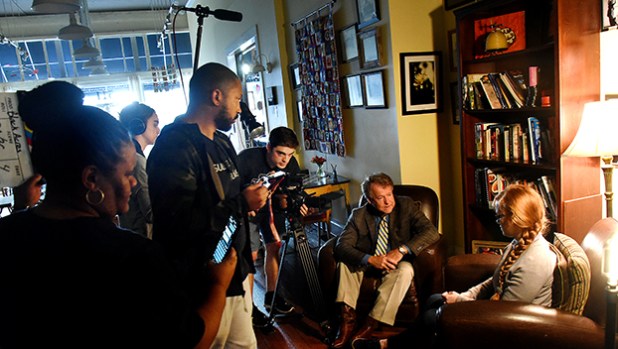 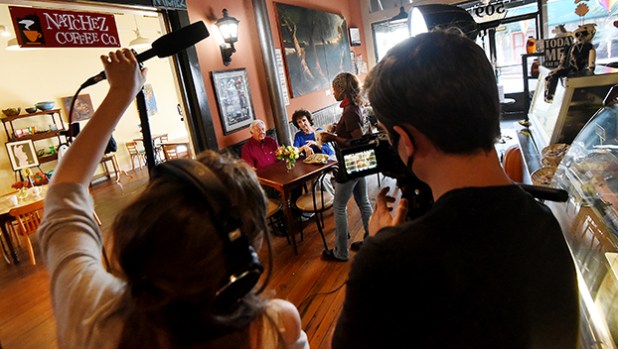 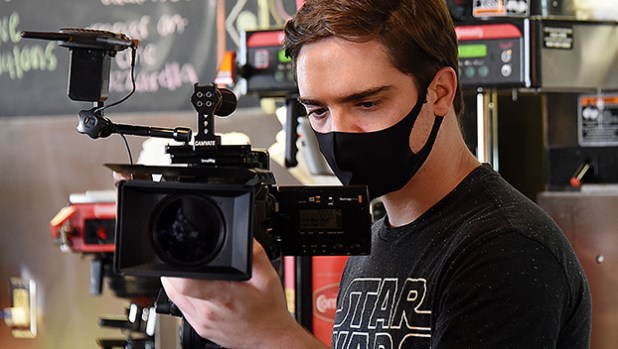 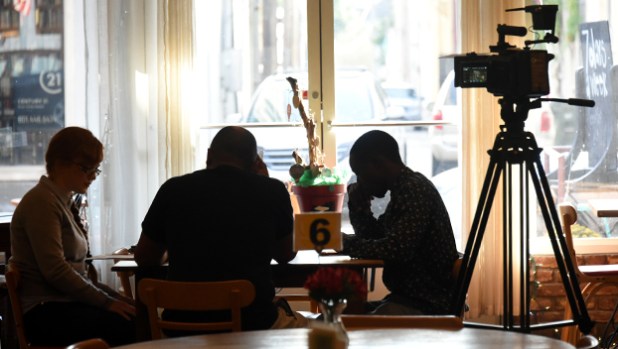 Holly Bonney, left, and Devante Stewart, right, prepare for their next scene with director Scott Sullivan. Scenes for the trailer for the psychological thriller "Black Acres" were filmed in the Natchez Coffee Company Saturday. (Ben HIllyer / The Natchez Democrat) 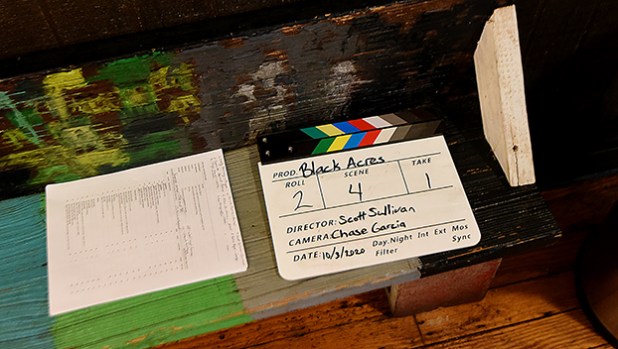 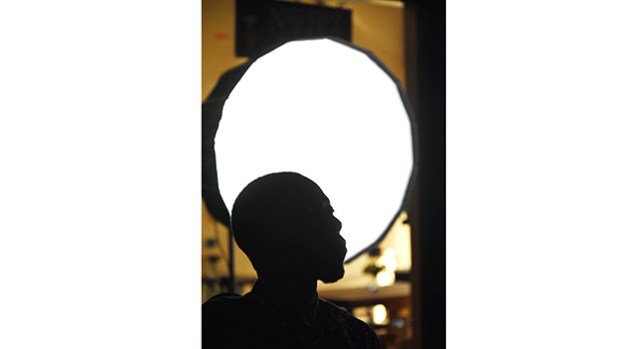 Devante Stewart acts in a scenes for the trailer of "Black Acres." Scene for the psychological thriller were filmed in the Natchez Coffee Company Saturday. (Ben HIllyer / The Natchez Democrat) 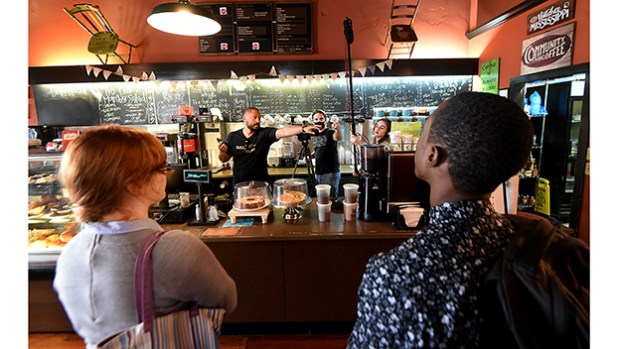 Scenes for the trailer for the psychological thriller "Black Acres" were filmed in the Natchez Coffee Company Saturday. (Ben HIllyer / The Natchez Democrat) 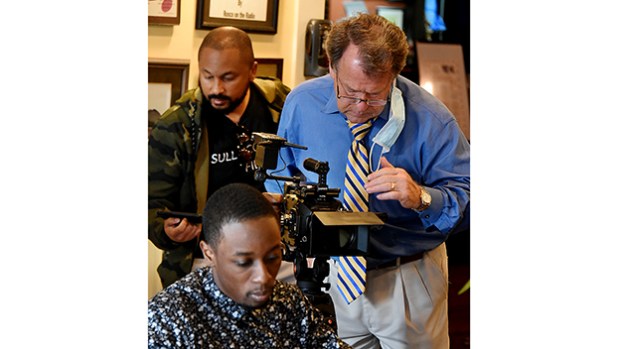 Late afternoon customers sipped cups of coffee as they watched a Baton Rouge film crew set up lights and video equipment for what producer Leo Honeycutt and director Scott Sullivan hope will be the next big psychological thriller to hit movie theaters.

The scenes shot in the Franklin Street coffee shop will be part of a trailer for the movie “Black Acres.” Sullivan said the trailer would be specifically targeted to draw interest from moviegoers and filmmakers.

“We are doing a pitch trailer,” Sullivan said. “In order to attract attention to the idea of the film, as well as maybe attract financing, we are kind of working backward.”

Sullivan also wrote the movie’s screenplay, which he describes as a “psychological mystery with an element of a thriller.”

“They end up getting together and teaming up, and they go into a small rural town, and they start to investigate this lesser-known historical event that occurred in the town,” Sullivan said. “The problem is the town is very secretive. As the story begins to unravel, they begin to discover that they may be catching wind of a story that they may not live to tell.”

Sullivan said the trailer would be part of the previews shown for a recent feature film he completed called “Trigger Girl.” Sullivan said he hopes that movie will premiere in Baton Rouge movie theaters in November.

“The idea is to have that feature film shown in theaters, and one of the trailers of that film will be this trailer. That will be the initial pitch strategy, which is to create awareness among the movie-going audience,” Sullivan said. “After that, we will begin a targeted approach to producers and companies who may be interested in partnering with us to create the film. But we are really interested in marketing to the targeted audience first.”

Producer Honeycutt also plays a supporting role in the movie.

“I am a college dean, and I have been on this college student to hurry up and get her thesis done, or she will be not be granted tenure,” Honeycutt said. “She has been reluctant and hesitant to write this thesis all along because it involves a very dark thing that happened in her family’s past.”

No stranger to Natchez, Honeycutt suggested to Sullivan that the area would be an ideal backdrop for the film.

An award-winning television journalist for over 30 years, Honeycutt spent many years working in Baton Rouge and Louisiana. He was a co-host of the Baton Rouge morning show “2une-in” in the late 1980s and into the 1990s.  While working as a Louisiana journalist, Honeycutt became good friends with former Natchez Mayor Tony Byrne and, as a result, has visited Natchez many times.

“Tony and I have been friends for 45 or 50 years,” Honeycutt said. “We have been through a lot together. He has graciously let us use his lake house on Lake St. John.”

Byrne and his wife Annette made their cameo appearances as local coffee shop customers during the filming Saturday.

The crew filmed several scenes for the trailer at the lake house, Honeycutt said.

Over the years, Honeycutt said he has fallen in love with the area and thought the location would be ideal for the film.

“I think it is the most photogenic city in the country,” Honeycutt said. “Natchez is known for period pieces, but it doesn’t have to be for just period pieces. There is just a charm to the place that the camera can capture more easily than anyplace else.”

Having visited Natchez before, Sullivan agreed, especially after doing some research into the city’s past.

“I learned about the history of the place, and it was an amazing fit,” Sullivan said.

Honeycutt said he is excited about the prospects for “Black Acres,” an excitement that grew from the moment he read Sullivan’s screenplay.

A graduate of the American Film Institute in Los Angeles, Honeycutt spent two years working for Regis Philbin while in California.

“So I was in the business,” Honeycutt said. “Scott writes better than anybody who was writing there more than 30 years ago.”

Honeycutt said he wasn’t much interested in the screenplay when Sullivan called him “out of the blue.”

“I get pitched book ideas and story ideas like that all of the time. Ninety percent of them are really not that good,” Honeycutt said.

Although reluctant, Honeycutt said he read the script when it came in the mail.

Years later after they met, Honeycutt and Sullivan hope the trailer filmed in and around Natchez brings the script to life and, if it all works out, a feature-length film on the big screen.

“Natchez has been so nice and so kind while we have been filming,” Sullivan said. “I hope y’all come and see the movie when it comes out.”