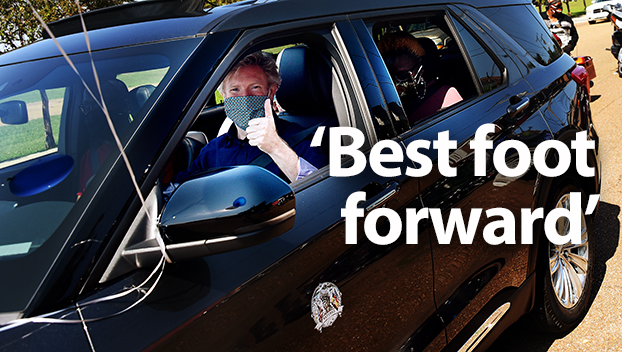 Natchez Mayor Dan Gibson gives a big thumb’s up from the city’s new car Saturday afternoon on Broadway Street before leading the parade at the second annual Bikers on the Bluff event. (Ben Hillyer / The Natchez Democrat)

The parade was organized by Seeds of Change Resource Foundation founder Carolyn Myers. The mayor was selected to serve as the event’s Grand Marshal.

Many people in attendance were afforded the opportunity to see the city’s new $47,000 vehicle for the first time as the mayor drove the parade route beginning on Broadway Street.

Gibson said the City of Natchez has traditionally allowed the mayor to drive a mayor’s vehicle a long time before his administration.

“It’s important when you are entertaining an investor, when you are showing people around town and when you are representing this city to always put the best face of Natchez forward,” Gibson said. “That is the significance of having the city vehicle.”

Gibson said the city’s choice of vehicle was tasteful. The vehicle would still be owned by the City of Natchez at the end of Gibson’s term, he said.

“We chose the Ford Explorer because it’s a nice SUV, it gives good visibility to show people around and has plenty of room. We also wanted to buy local. We didn’t want to buy some luxury, expensive vehicle because we always want to do the prudent thing.”

City officials also identified enough funds in the budget to purchase the vehicle outright without having to finance and pay interest.

In total the city would realize approximately $461,000 total in savings from what had been budgeted for the 2020-2021 fiscal year, Gibson said.

Of the city’s savings, the Board of Alderman allocated $47,107 to purchase the mayor’s vehicle, $5,000 to add names to the Proud to Take a Stand monument and the remaining funds to beautification and cleaning adjudicated properties in Natchez, Gibson said.

“We didn’t purchase this until we made sure we had the money,” he said.