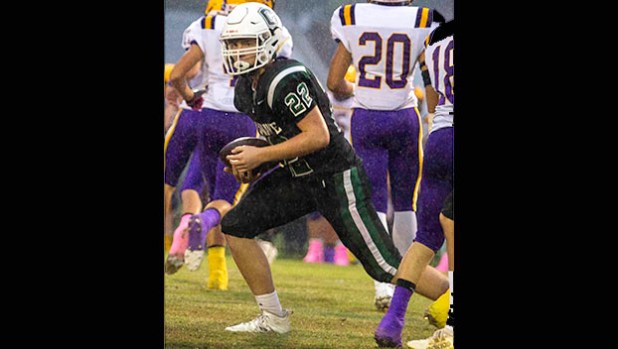 Cathedral sophomore Jake Hairston recovers a fumble sending Centreville Academy's offense back to the bench on Thursday night in a game with multiple turnovers due to wet conditions. (Courtesy Bill Barksdale) 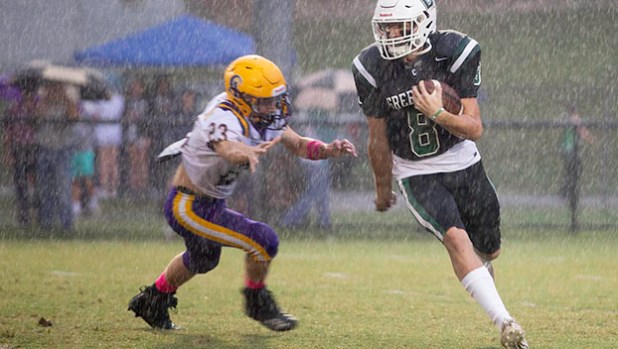 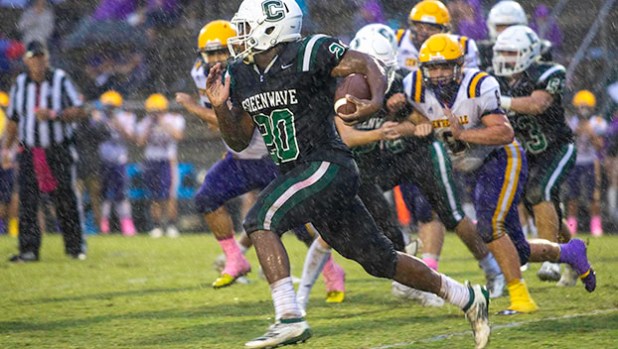 The win marked the first shut out of the season for Cathedral and it is 41-0 overall when allowing less than 10 points in a game.

“The win was well earned for all those guys who played defense tonight, hard work and dedication paid off,” said Chuck Darbonne, Cathedral head football coach.

“I ran well because the linemen blocked well for me,” Batieste said. “They offensive linemen made big holes for the running backs to run through. I felt like I played good on both sides of the ball tonight.”

The Green Wave threw the ball 13 times for 79 yards. Noah Russ threw five completions for 79 yards, one touchdown pass for 26 yards to Harper Jones and one interception. Darbonne said the Green Wave ran the ball more than pass the ball due to the rain and the sloppy field.

Cathedral’s defense gave up 71 yards on offense. KJ Washington led the Green Wave with five tackles. Batieste also had an interception for 12 yards.

“I was very proud of myself of how aggressive I played throughout the game,” Washington said. “It set the tone for the team. We just kept going hard and we still have to improve on our tackling and not having a lot of penalties.”

The big play for the Green Wave came on defense in the fourth quarter with the rain continuing to fall. The Tigers were on their way to trying to score a touchdown when Peyton Jones, Centreville Academy’s quarterback, tried to pitch the ball back to his running back. Cathedral’s Cam Tanner caught the ball out of the air and ran it for an 86-yard touchdown.

“Cam’s touchdown was awesome,” Washington said. “I really love to see that, especially from a younger player. It gives them a drive to keep pushing for the future.”

Caleb Kinabrew had 31 yards rushing for the Tigers’ offense and Jones was 1-for-5 with nine passing yards. Ace Sellers and Darani Garcia led the Tigers’ defense with six tackles and Nicholas Parrish had an interception.