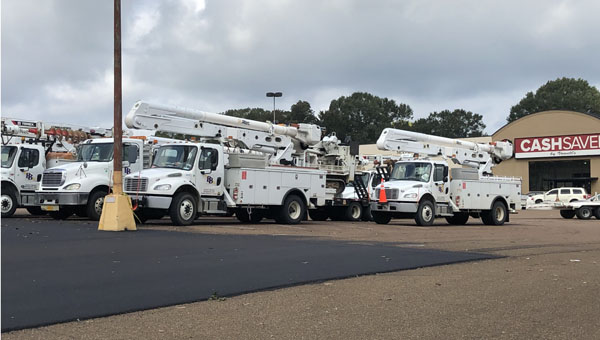 B&B Electrical & Utility Contractors Inc. trucks from Brandon converged on the parking lot at the CashSaver grocery store on Devereux Drive Monday morning before dispersing to assist Entergy in restoring electrical power to some 400 customers still without power after Hurricane Delta. (Scott Hawkins, The Natchez Democrat)

Adams County Southwest Electric customers who got power restored over night Sunday are in Cranfield, Kingston, Kingston Road and along the U.S. 61 corridor south of Natchez, including Roux 61 and the Beau Pré subdivision, said Kevin Bonds, CEO of Southwest Electric.

Some 2,800, or 51%, of Southwest Electric customers were still without power Monday morning in Adams County, however.

“Even at Kingston, we had a lot … of scattered outages, single-phase lines and other incidents along Kingston Road and 61 South down toward Sibley, we do have some meters there we are still working on,” Bonds said. “At Elgin subdivision, we have a broken pole and several stripped cross poles there but we’ve got two crews working it now.”

Bonds said that crews have been focused on restoring main feeder lines, most of which are back on now.

“Now that they’ve got the main feeders we can start getting the radials off of it and start picking up,” Bonds said, adding some customers may not have their power restored for another five days.

“We will know more after today to see what kind of progress we’ve made,” Bonds said. “We still have some major poles to set in place and that is just seeing how the work progresses today. I appreciate all of the other cooperatives in the state and surrounding areas that all pitch in. Southwest, we just got back from Alabama and that is just the way coops work. We reach out and help one another.”

As for the customers: “We appreciate their patience. Just bare with us because we have our guys out working as hard as we can to restore power and get them back on,” Bonds said.

“We actually have several hundred more workers coming in today to really hit this hard today,” Runnels said. “We are hoping to knock out as many of the outages as possible of that today. Most of the outages were concentrated in certain areas when we first started the storm but we do the big numbers first and move down to the smaller numbers and now they are scattered. These take a little longer but right now we are making a hard push today to get as many customers back on as possible.”

“It has been a great effort,” Runnels said. “We had approximately 150 workers here up through today and today we are providing meals for up to 500 workers today. We are bringing in a huge force to hit it hard and try to get as many customers back on today as possible.”