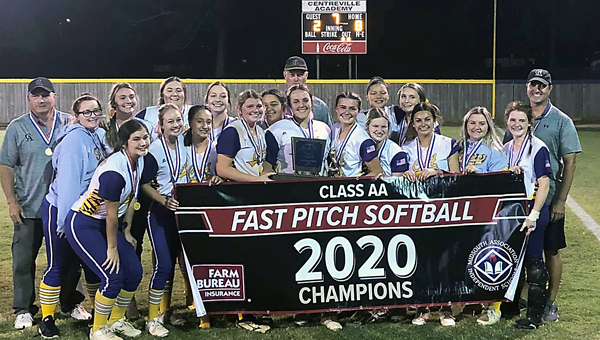 CENTREVILLE — The Centreville Academy Lady Tigers were on their home turf Tuesday night and having the home-field advantage paid off in a big way as they defeated the Glenbrook School Lady Apaches twice to capture the MAIS Class 2A Fast-Pitch State Championship.

Centreville Academy entered Game 2 of the best-of-three series trailing defending Class 2A state champion Glenbrook one game to none. Needing a victory to keep their state title hopes alive, the Lady Tigers shut out the Lady Apaches 3-0.

“The biggest thing I said (before Game 2) was to settle down and block out all the hype. They managed to get that done (Tuesday) night,” Lady Tigers head coach Billy Jones said. “They put it in a positive way.”

Lana Dalton threw a complete-game shutout and scattered five hits. She struck out three and walked two. She was aided by a defense that committed just one error as well as an offense that scored two runs in the bottom of the first inning, one of them on an error, to give Centreville the early lead.

“I think it put them in a little more relaxed mode. I think it’s always good (scoring early) to take the pressure off them,” Jones said. “These kids applied every aspect of the game – defensively, offensively, the mental approach. These kids put it all together like we had hoped for.”

In the winner-take-all Game 3, Centreville belted out 11 hits in an 8-2 win to win the state title. Dalton again was sensational on the mound as she allowed two unearned runs, both in the top of the seventh inning, on three hits with seven strikeouts and two walks.

“Lana Dalton threw as fine of two playoff games in a series as I have ever seen,” Jones said. “She did an outstanding job for us both games.”

“We played a very good defensive team and offensive team. Glenbrook is a solid team defensively. To go in and get that many hits is a testament to our team’s determination and ability,” Jones said.

Centreville Academy, the Class 2A South State and State champion, finished its season with an overall record of 26-11-1.