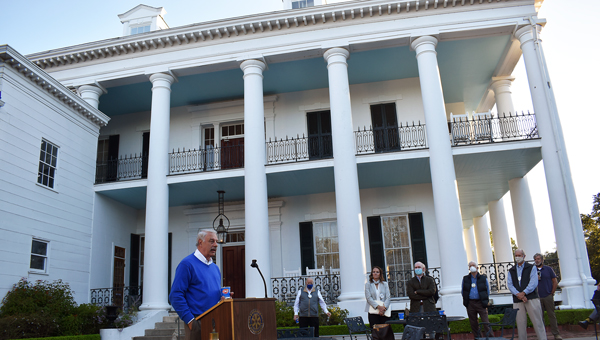 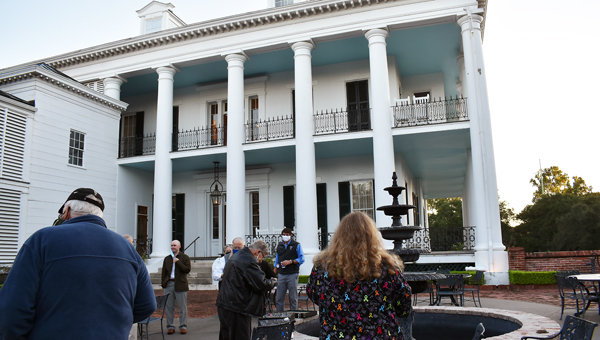 Members of the Natchez Rotary Club held their first in person meeting since the COVID-19 pandemic began in the courtyard at Dunleith on Wednesday morning. (Scott Hawkins, The Natchez Democrat) 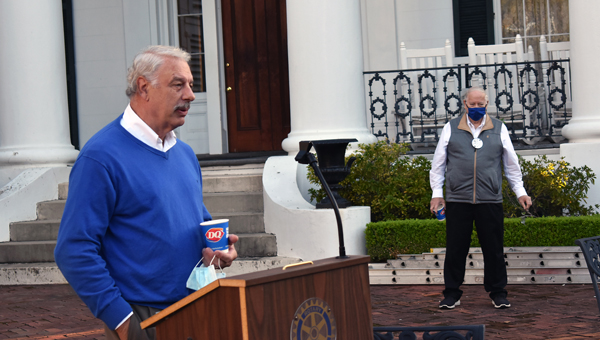 NATCHEZ — A reopening date for Dunleith Historic Inn is still uncertain but work on restoring the historic Natchez landmark mansion is progressing despite the COVID-19 pandemic, one of the principal partners in the property said Wednesday.

The Rotary club’s meeting was held at 7:30 a.m. Wednesday outdoors in the courtyard of Dunleith to allow for social distancing of the approximately 30 members and guests in attendance, most of whom wore masks when not able to maintain proper social distance.

“We bought the place in November and the original plan was shortly after Christmas we were going to jump on it and get the work done and then the virus business started and everything got kicked back,” Blattner told the assembled group.

Blattner said Jaeger, who is the principal owner of the J Collection, the largest owner of downtown hotels in New Orleans, took a big hit from the COVID-19 pandemic.

“Joe has been devastated by this,” Blattner said. “He owns about two dozen hotels in downtown New Orleans. (Most of them) are shuttered right now.”

Blattner said Jaeger opened a couple of his New Orleans hotels a couple of months ago and is running those with only 10% occupancy.

“He’s losing money to have the doors open, but he felt like he needed to open up a couple, so the Royal Orleans and The Jung (Hotel & Residences) are now open,” Blattner said. “There are no conventions in town. There are no tourists in town so it is just not going well. We put this property back on track about a month and a half ago and the work is proceeding really well.”

Blattner, speaking in the courtyard from behind the Natchez Rotary Club’s lectern in the shadow of Dunleith, said despite the pandemic, the owners had hoped to open Dunleith before the end of the year.

“I don’t know if we are going to make that or not, but we want the property to be right,” Blattner said. “It had been in neglect for a number of years, and we are trying to get a lot of things fixed. As you can imagine with an old house like this, we fix one thing and then we find two more, so it’s proceeding well and will be really nice when it is open.”

John Holyoak, manager of Dunleith’s Castle restaurant, said in introducing Blattner said the owners had rehired three other former Dunleith employees and himself and that the plan is to eventually rehire as many of the property’s former employees as possible.

Blattner said the property when fully operational would have between 50 and 60 employees. Dunleith has approximately 22 guest rooms and the owners are still renovating the structure, which recently had a new roof installed.

Other work to be done includes renovating the Castle kitchen, heating and air conditioning work and general cosmetic work throughout.

“The other moving part of this is we want to make the Castle a place where people will come from miles around to eat, and to do that, we need to have a good chef and we have interviewed three,” Blattner said. “There is one who has kind of floated to the top. He is being interviewed for another round right now so we hope to have the chef part in place soon.”

Blattner said Holyoak would be in charge of hiring staff back when Dunleith gets a reopening date.

During Tuesday’s meeting of the Natchez Mayor and Board of Aldermen, the board declared the Margaret Martin Building surplus property to begin the process of selling the property to the owners of Dunleith.

“I know this kind of got out in the public yesterday in the alderman meeting but Joe would also like to buy the Margaret Martin Building,” Blattner said. “If we buy it, it would be rehabbed to what it should be. The auditorium would be restored and be available to the Festival of Music and the community to use the meeting rooms, a spa, maybe some additional hotel rooms.”

Blattner said the owners also would like to have an educational component in the Margaret Martin facility.

“The movie people have expressed an interest in maybe doing a theatrical school,” Blattner said. “I’ve been approached by the Natchez Adams County School Board to possibly do an arts school and Joe would like a cooking school go in. At any rate, it would be neat to have some aspect of the building to be used as a school again so that is what our hope is that that will be part of the mix.”

The owners also are in the process of trying to purchase the 15 acres that connect Dunleith to the Margaret Martin building, Blattner said.

“It is in the bankruptcy court,” Blattner said of the connecting property. “We are working on that right now and hopefully that will come to pass. It will make a good entryway.”

Blattner, who owns Cherokee historic home in Natchez, is a retired business owner and engineer who sold his business and moved to Natchez in 2006. He said his partners, Jaeger and Waesche will be great additions to the community.

“Joe (Jaeger) has been a friend of mine for 30 some odd years,” Blattner said. “He is just a first-class guy. Self made. Sold a huge construction company years ago and decided to go into the hotel business, so that is his business now. Joe is 73 and he just doesn’t stop, just keeps on going. He will be a great operator and the truth is I would have never gotten involved in this unless he would have been involved as the operating partner.”

Blattner said he has known Waesche for approximately 40 years.

“Randy is a little crazy,” Blattner said. “His roommate in college was Bill Murray. I’ve had dinner with the both of them and I can tell you out of the two of them Bill is the sane one. Randy is crazy. He comes up fairly frequently to visit with us. Y’all will get to know him. He is a lot of fun but both of these guys are going to be a good addition to the community. I’m looking forward to having them involved and I hope everybody will be happy with what we do with the property.”