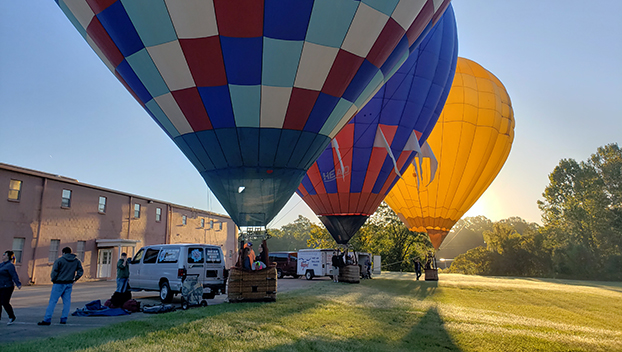 NATCHEZ — With some COVID-19 precautions in place, organizers of the 35th annual Natchez Balloon Festival plan to keep with tradition while also keeping festivalgoers safe.

While the festival’s schedule is pared down, Natchez Balloon Festival Director Scott Adams said attendees could expect more than 40 hot air balloons to launch from the Bluff and throughout the City on Oct. 16, 17 and 18, if the weather permits.

“We felt comfortable that proceeding with just the balloons would be the best option,” Adams said.

Masks and social distancing between groups from the same household will be enforced for all attendees, Adams said.

“We will be providing free masks for those who don’t have one,” Adams said, adding hand sanitizer stations also would be set up through the event.

The festival will not include live music or vendors as usual and instead of taking place on the grounds of historic Rosalie, the balloons will be dispersed through the city to prevent too much crowding.

Adams said balloons would launch from up to nine different locations throughout Natchez and along the bluff.

Most locations will probably have one to two hot air balloons. The bluff will host up to seven, Adams said.

“We are just trying to break up where crowds might gather,” Adams said.

The festival also is coordinating to designate part of Broadway as a one-way street from Madison to the grounds of Rosalie, so people can drive by and see the balloons and festivities without being around a crowd.

“We’re encouraging that as another measure,” Adams said.

Commemorative Balloon Festival T-shirts, posters and artwork are also available to purchase online and through the Historic Natchez Foundation. Over the previous 34 years, planning the festival has been a large undertaking unto itself, but nothing like planning around a pandemic this year.

He said in a normal, the festival averages 3,000 to 3,500 attendees from all over, depending on the college football schedule and what entertainment was scheduled to perform.

But with the current situation, he is not expecting as many attendees from outside the general area.

“This year, we’re doing it primarily for the community,” Adams said, it would be hard to judge how many attendees will take part this year.

Adams said the planning committee works year-round to host the festival for the past three decades.

When things became uncertain in March, the planning committee put everything on hold. The organizers wanted to see what developed with virus and how other festivals would proceed.

Adams said many other festivals canceled events indefinitely for the year.

Adams said the planning committee still wanted to proceed with the festival as safely as possible, because it is one of the Natchez’s largest tourism draws.

“Not only is it an event, but it is a benefit to the city, the county, and the businesses,” Adams said.

Many business owners count on the extra revenue generated from the festival each year, Adams said.

“We are hopeful that people will still come into town to give a little economic boost to the businesses in town,” Adams said.

Balloon flights will take place mornings and evenings for Friday and Saturday at 7:30 a.m. and 4 p.m. respectively, and one final Sunday morning flight at 7:30 a.m.

Nightly balloon glows are also scheduled in addition to a fireworks show Friday night only.

Natchez Mayor Dan Gibson said it speaks to Natchez residents’ strength of spirit that the city is determined to host the festival, which is taking place as safely as possible.

“It is a tradition that has been going on so long that we can’t imagine the fall without it,” Gibson said.

Gibson said he has enjoyed seeing the balloons take flight for years and never tires of the nightly balloon glows over the Mississippi River.

Gibson said the festival showcases the best of Natchez, but he also hopes the socially distanced tourists who attend will help the tourism industry, which has suffered the past eight months. Gibson said local restaurants, hotels and several bed-and-breakfasts are reporting more businesses and bookings for that weekend already.  Gibson said for non-Natchez residents the festival provides a safe event visitors can enjoy and might take away some of their stress.

“During this time, with a pandemic going on…it’s an opportunity to escape and enjoy the beauty of Natchez,” Gibson said. “The bottom line is, I just love to see all the new faces who come here and fall in love with Natchez.”

Gibson said so many organizations, committees and individuals have put so much into planning and hosting the event for the community.

“I could not be more proud of Natchez,” Gibson said.