Prep round up: ACCS wins 12-0 to claim district championship 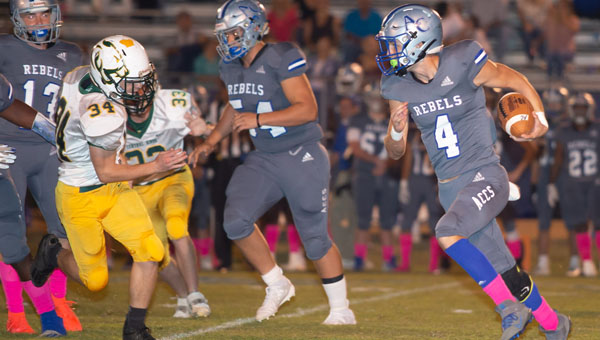 ACCS took a 6-0 lead in late in the first quarter and expanded its lead to 12-0 with 7:19 left in the second quarter before play was stopped due to bad weather.

After a nearly two-hour delay, play resumed at 9:30 p.m. and the Rebels defeated the Central Hinds Academy Cougars by that same 12-0 score to win the district championship.

COLUMBIA — Tra’Quian Conerly had two touchdown runs and Ja’marlin Green had a touchdown run of his own as the Franklin County High School Bulldogs beat the East Marion High School Eagles 26-8 Friday night.

Conerly also had a team-leading 10 tackles while Donovan Moore had an interception and two fumble recoveries to lead the Bulldogs’ defense.

Franklin County (4-4) plays host to Jefferson County High School next Friday at 7 p.m. in a key MHSAA Region 7-3A game.

CENTREVILLE — The Centreville Academy Tigers would not let inclement weather mess up their Senior Nigh as they cruised to a 36-14 win over the Newton County Academy Generals in an MAIS District 3-3A game Friday night.

Centreville jumped out to an early 16-0 lead before play was stopped due to lightning. Once play resumed well over an hour later, the Tigers didn’t let up as they led Newton County Academy (0-9, 0-3) 30-6 at halftime. The Tigers finished second in District 3-3A and will be in the MAIS Class 3A Playoffs, which starts next week. Where they will be seeded and their opponent will be determined this weekend.

FAYETTE — A safety by Hazlehurst High School’s defense in the fourth quarter allowed the Indians to escape with a 16-14 win over the Jefferson County High School Tigers Friday night.

Jefferson County jumped out to an 8-0 lead late in the first quarter when Marques Smith scored on a 4-yard run and Jamarion Claiborne ran in for the 2-point conversion. Hazlehurst (4-3, 3-0) responded with a pair of touchdown passes in the second quarter to take a 14-8 lead. With 26 seconds left until halftime, Kendrick January Jr. scored on a 20-yard pass from Smith, but the 2-point conversion attempt was no good, making it a 14-14 game at halftime.

LAUREL — Not even a one-hour weather delay could keep the West Jones High School Mustangs from getting back in the win column as pulled away in the second half to defeat the Natchez High School Bulldogs 42-12 Friday night in an MHSAA Region 7-3A game.

The two teams went back and forth in the early stages of the first quarter with as West Jones scored both of its touchdowns through the air while Natchez High scored on a TD run, giving the Mustangs an early 14-6 lead. It would remain that way through halftime before West Jones (5-1, 1-1) dominated the Bulldogs in the second half.

HAYNESVILLE, La. — The Wilkinson County Christian Academy Rams jumped out to a big lead and never looked back as they cruised to a 62-8 win over the Claiborne Academy Rebels in MAIS 8-Man football action Friday night.

With the win, WCCA improved to 9-0 overall and hosts District 2-1A foe Prentiss Christian School for Senior Night in a pivotal district match-up. Claiborne Academy fell to 4-6 overall.

This game was pretty much over early as General Trass scored 28 points in the first quarter and never looked back. By halftime, the Panthers (3-1, 2-1) had a commanding 36-0 advantage.

Logansport (1-1, 1-0) scored 20 points in the first half and 20 points in the second half while shutting out Block in the process. Block (0-4, 0-1) plays host to LaSalle High School for homecoming next Friday at 7 p.m.