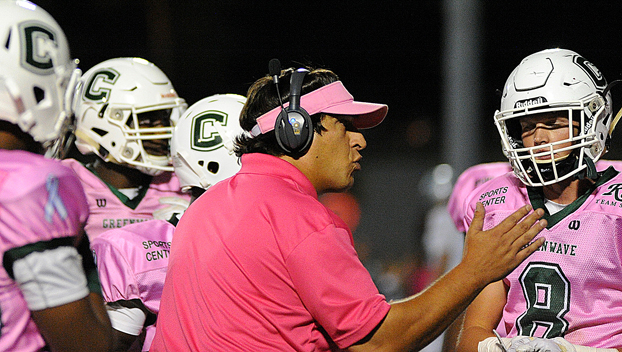 NATCHEZ — The Cathedral High School Green Wave has officially forfeited its MAIS Class 4A second-round game that was scheduled to take place Friday night at Winston Academy due to the COVID-19 outbreak that hit Cathedral School earlier this week.

“I’m heartbroken for all our players, especially our seniors. It’s a tough situation for everybody involved,” Cathedral head football coach Chuck Darbonne said. “I’m proud of how these kids played this season. It’s hard to go 10-1. They did everything we’ve asked them to do. We’re very proud of the effort they gave.”

The Green Wave started its season back on Aug. 14 and defeated Wayne Academy on the road 34-14. After its game at Bowling Green School on Aug. 21 was canceled due to still-ongoing coronavirus restrictions in Louisiana, Cathedral took on Central Hinds Academy on Aug. 28 and defeated the Cougars 40-16.

After a road win over Hillcrest Christian School (51-7) in its District 4-4A opener followed by home wins over Glenbrook School (62-37) and district rival Brookhaven Academy (27-17), Cathedral was 5-0 overall and 2-0 in district play heading into its showdown with defending district and state champion Riverfield Academy on Friday, Sept. 25.

But even with the home-field advantage, the Green Wave fell to the Raiders 37-8, eventually costing Cathedral the district championship. Riverfield’s 46-13 home win over Brookhaven Academy gave them the district crown.

The Green Wave would go on to win its final four regular-season games, including shutout wins over Centreville Academy and Amite School Center, and a 35-7 win over archrival St. Aloysius High School in a game that was called early in the second quarter because of inclement weather.

Cathedral entered the Class 4A Playoffs as the No. 5 seed and promptly defeated No. 12 seed Hillcrest Christian at home 55-26. Unfortunately, the COVID-19 outbreak that forced all ninth- through 12th-grade students as well as all sixth-grade students to be quarantined for nearly two weeks also forced all sports to be canceled between Nov. 3 and Nov. 13.

“I’m very proud of everybody that is involved in this football program and how hard they worked to get to this point,” Darbonne said. “It’s truly disappointing that it had to end this way.”

Because Cathedral had to forfeit its playoff game, it also results in a loss, meaning the Green Wave’s final overall record is 10-2. Winston Academy, the No. 4 seed improved to 8-4 overall and will win the game by a score of 18-0. The Patriots will take on the winner of Friday night’s game between No. 8 seed Canton Academy and No. 1 seed Riverfield Academy.