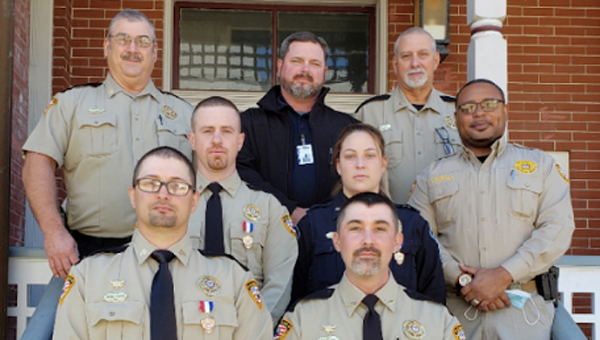 NATCHEZ — On Monday, four law officers received “Distinguished Service” medals for saving the life of a gunshot victim in July.

Law officials said the shooting occurred on Friday, July 10, at approximately 5:30 p.m. near Magnolia Bluffs Hotel on Canal Street.
“James Tillman, was shot several times and received several life (threatening) injuries,” Patten said. “Sgt. McGinty was notified of the gunshot victim laying in the street on the corner of Canal and Magnolia Bluffs.”

“They immediately started applying pressure to the wounds and tourniquets where appropriate. Undoubtedly, the efforts of these selfless law enforcement officers contributed to the survival of this victim,” Patten said.

Tim Houghton, AMR supervisor, said by the time the ambulance would have arrived on the scene it could have been too late for the victim.

“The response by the officers was absolutely instrumental in the overall positive outcome of this individual,” Houghton said. “… Physicians and surgeons repeatedly stated that this individual would have succumbed to his wounds prior to the ambulance getting to the scene. … Had they not taken the actions that they have taken, this individual would not have made it.”

Taylor was off-duty when she arrived at the scene of the shooting to help, Patten said.

Natchez Police Chief Walter Armstrong said after the meeting he was glad to hear that one of his officers helped save a life.

“Our officers are trained to respond in emergency situations,” Armstrong said. “It is always good to hear that their actions were able to help save someone’s life.”

Also during Monday’s meeting of the Board of Supervisors, the board heard a presentation from Attorney Kevin Colbert regarding the proposed public defender’s office. Colbert said he prefers the traditional public defender’s system where attorneys are appointed by the judge to serve indigent clients and in lunacy hearings.

Colbert said the proposed office, which is estimated to cost approximately $300,000 per year, is expensive and the county would be locked-in to the cost.

Supervisor Kevin Wilson said the purpose of the public defender’s office is to save money and to hold lawyers accountable for fairly serving their clients with county funds.

The board took no action regarding the public defender’s office in Monday’s meeting.

4Unanimously extended the Adams County emergency proclamation for COVID-19 until December. Emergency Management Director Robert Bradford said the EOC is tracking 72 active COVID-19 cases in the county as of Monday.

4Unanimously allocated $17,000 collected from the sale of unusable vehicles to purchase a used vehicle for the Adams County Sheriff’s Office for $18,000. Patten said the difference needed to purchase the vehicle could be found in ACSO’s budget without asking the county for additional funds.

4Unanimously abandoned Stanley Davis Road after a public hearing. Officials said the road is not being used by the general public and people were using it to dump trash and debris onto private property.

4Unanimously approved advertising for a replacement for an employee in the Adams County Road Department who is retiring.