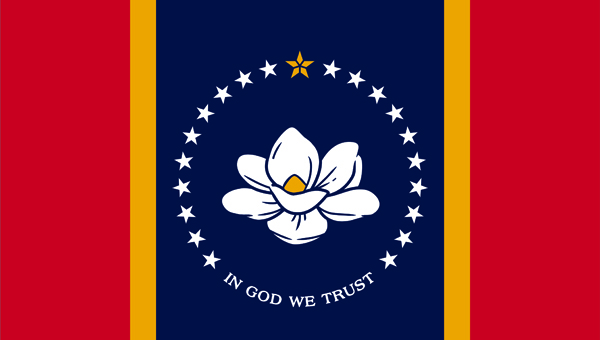 JACKSON (AP) — A new Mississippi flag without Confederate images was flying in parts of the state on Wednesday, one day after a majority voters approved the design that has a magnolia encircled by stars and the phrase “In God We Trust.”

Officials hoisted the flag outside Hattiesburg City Hall and on the campus of the University of Mississippi in Oxford.

“Mississippi voters sent a message to the world that we are moving forward together,” former Mississippi Supreme Court Justice Reuben Anderson said in a statement.
Anderson led a nine-member commission that recommended the new flag design. Uncertified election results — which at midday Wednesday did not yet include numbers from Pearl River County — showed the new flag received more than 70% support. It got a majority in all reporting counties except George and Greene.”I have a renewed sense of hope for my grandchildren and great-grandchildren, and I know this new symbol creates better prospects for the entire state of Mississippi,” Anderson said.

Mississippi legislators in late June retired a 126-year-old state flag that was the last in the U.S. to include the Confederate battle emblem. The vote occurred as protests over racial injustice were taking place across the nation and Confederate monuments were being toppled or taken down by authorities. The Southeastern Conference and the state Baptist convention were among groups that urged legislators to shelve the flag that critics called a constant visual reminder of Mississippi’s racist history.

The governor, lieutenant governor and House speaker appointed flag commissioners, and the public submitted more than 3,000 designs, including one featuring a giant mosquito. Legislators specified that the new flag could not include the rebel symbol and must include, “In God We Trust.” They also said a single flag would go on the ballot for a yes-or-no vote.

The new flag pays tribute to the Native Americans with a gold star made of five diamond shapes. The diamond motif is important to the Choctaw culture.
As a formality, legislators must put the new flag design into law. That action is not up for debate because the law eliminating the old flag requires legislators to adopt the new one if voters accept it.

Nathan Cash, a 68-year-old auto mechanic from Pearl, said he voted in most races on Tuesday’s ballot but skipped the flag issue. Cash, who is white, said a flag is “not anything to fuss over,” and he wasn’t bothered by the old one. Standing outside a polling place Tuesday evening, Cash shrugged and said, “I always liked it, but so what?”
Eartia Cotten, a 61-year-old retired bookkeeper from Madison, said she enthusiastically voted for the new flag with the state flower.

“I love it,” Cotten said after casting her ballot Tuesday.

Cotten, who is Black, said she was indifferent to the old flag. “I got used to it,” she said. “It’s just what we had.”

A group called Let Mississippi Vote is starting an initiative that seeks to revive the old Confederate-themed flag by putting it and some other designs up for a statewide vote. Organizers must gather more than 106,000 signatures to get their ideas on the 2022 ballot, and their efforts could be complicated by limited public interaction during the coronavirus pandemic.

White supremacists in the Mississippi Legislature adopted the flag with the Confederate battle emblem in 1894 during backlash to power Black people gained during Reconstruction. For decades, that flag was divisive in a state with a significant Black population, currently about 38%. A majority of voters chose to keep the flag in a 2001 election, but several cities and counties and all of Mississippi’s public universities had stopped flying it because of the Confederate symbol.

For decades, South Carolina flew a Confederate battle flag on or near the Statehouse in Columbia. Legislators there removed the flag after a white supremacist killed nine Black people as they worshiped in a church in Charleston in 2015. The gunman had previously posed for photos with a rebel flag.