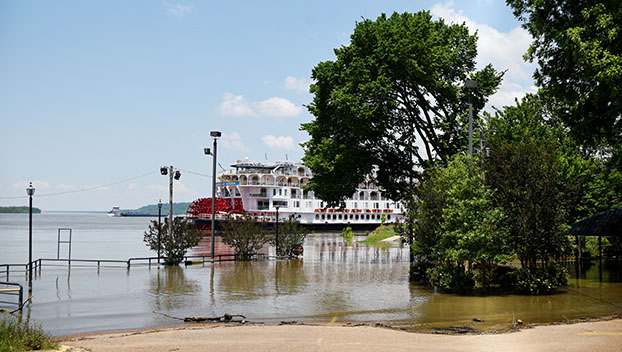 Plan in works to build three docks and prevent flooding Under the Hill on Silver Street as seen in this file photo. (File photo, The Natchez Democrat)

Natchez Mayor: Project would construct three docks and prevent flooding Under the Hill

NATCHEZ — The City of Natchez is in the early planning stages of a project to construct three docks Under the Hill and to make modifications to Silver Street so it does not flood, said Dan Gibson, Natchez mayor.

“We are in the process of early planning for a three-dock in three years ambitious project that would include modifications to Silver Street to prevent flooding and to increase the developable commercial real estate Under the Hill,” Gibson said. “We had a very promising meeting with American Cruise Lines yesterday (Thursday). We are following that up with a meeting next week with the American Queen and the Delta Queen organization and Viking is continuing to do what they are doing.”

Gibson said the project is expected to take approximately three years to complete and that the topic would be discussed at Tuesday’s meeting of the Natchez Mayor and Board of Aldermen.

Gibson said the plan emerged from a brainstorming session held two weeks ago.

“That meeting has led into more meetings and we had a fantastic meeting with the CEO of American Cruise Lines just Wednesday, and, as I said, American Queen and Delta Queen are coming in next week.”

Gibson said Warren L. Reuther Jr., CEO of Hospitality Enterprises of New Orleans, and who owns the Grand Hotel and Monmouth in Natchez, has been instrumental in the plan.

“Warren has so much experience in this area down in New Orleans and he is assisting in the construction of a dock in Vacherie (Louisiana),” Gibson said. “So we brought Warren in and he is providing some help to us.”