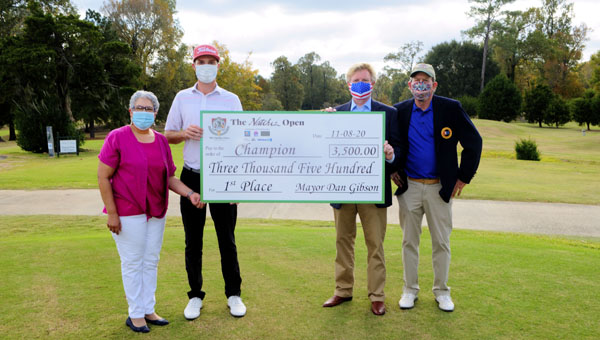 NATCHEZ — Natchez native and Vidalia resident Jordan Farmer played three solid rounds of golf over the weekend to win the championship flight in the amateur division of the 2020 Natchez Open Golf Championship.

Jordan Farmer shot rounds of 2-under-par 69 on Friday and Saturday and capped off his three days with an even-par round of 71 on Sunday for a three-day total of 4-under-par 209 for a 10-shot win over Mario Migliacio of Plaquemine, La.

“It was a wonderful event. Greg (Brooking) put on a great event. This is the first one ever. It was a great turnout and I think it will get better,” Farmer said. “The golf course was in great shape. Great tournament. Awesome tournament for the city of Natchez and for the golf course. Brought a lot of people from out of town. They ate at our restaurants and shopped at our stores. I think it will be a bigger and better tournament going forward.”

Farmer said that while he was happy to win the amateur division, he could have done even better and been a contender for the overall Natchez Open championship.

“I didn’t play great. I shot some decent scores. But I didn’t play great. I feel like I had an opportunity to win Overall. I had too many three-putts,” Farmer said. “I struggled on the greens. I didn’t putt very well the three days. I shot 69 on Saturday with five three-putts. That’s not like me. I played good enough to win the tournament, but I putted good enough to finish tied for fifth. I had a lot of fun. Met a lot of good people, both amateur and professional. “

Jordan finished in a tie for fifth place overall with touring pro Austin Rose of Tupelo, who also shot rounds of 69-69-71 to finish at 209. For winning the championship flight of the amateur division, he received a check for $750.00.

Touring pro Casey Fernandez of Durant had a three-shot lead over Weathersby after Friday’s first round with a round of 6-under-par 65. But Saturday’s second round started out promising and then turned into a near disaster.

Fernandez was 2-under-par for the day and 7-under for the tournament after a birdie on the par-5 5th hole before he double-bogeyed the par-5 10th hole. He responded with birdies on No. 11 and No. 14, only to bogey three of the last four holes for a round of 1-over 72 and at two-day total of 147, one shot back of Weathersby.

Weathersby expanded his lead over Fernandez to three shots early in Sunday’s final round thanks to four birdies on his first five holes while Fernandez managed just two birdies over that stretch. However, a bogey by Weathersby on 15 and a birdie by Fernandez on 16 cut the lead to just one shot with two holes to play.

Both players would go on to par No. 17 and bogey No. 18, making Weathersby the winner. While Weathersby had seven birdies and three bogeys for his final-round 67, Fernandez had five birdies and one bogey for his 67 to finish at 9-under-par 67 and a check for $2,000.00.

Touring pros Ross Bell of Madison and Greg Sonnier of Lake Charles, La. finished tied for third in both the professional and overall divisions with three-day scores of 6-under-par 207. Each received a check for $1,350.00.

Jeffrey Anderson of Natchez came in first place in the first flight of the amateur division with a three-day score of 11-over-par 224. Anderson had round of 74, 77 and 73. For his accomplishment, he won a check for $750.00.

Natchez native and Ferriday resident Trevor Farmer won the second flight of the amateur division with a three-day score of 32-over-par 245 and a check for $750.00. Trevor finished three shots clear of Adolph Hayes of Natchez as well as Drew Simon of Duson, La., who each had three-day totals of 35-over 248 and each received a check for $375.00.

Barry Stafford of Memphis, Tenn. shot a final-round 71 for a three-day total of 2-over-par 215 to win the senior amateur division as well as his own first-place trophy and a $750.00 gift certificate.

Stafford was one of four players tied for first place at 2-over-par 144 after the completion of Saturday’s second round. However, he nearly blew a three-shot lead down the stretch.

Robert Sanford of Meridian found himself down two shots after bogeys on No. 1 and No. 3, but cut Stafford’s lead to one after a birdie on No. 5. After both players parred 6, 7, 8, and 9, Stafford birdied both 10 and 11 while Sanford parred 10 and bogeyed 11, giving Stafford a four-shot lead. But Stafford lead Sanford back in contention with a bogey on the tough par-3 13th hole and a stunning two-shot swing on 14 in which Stafford bogeyed that hole while Sanford birdied it.

“I think it was an exceptional tournament overall. All the players were excited about it,” Brooking said. “We have a great champion (Weathersby). The tournament went very well. I was very pleased.

“We had Pete Powell in the amateur division. He’s a great champion, anyway. I look for Pete to win the thing next year. Besides Jordan winning, his nephew Trevor Wayne Farmer, won the second flight in the amateur division and Adolph finished tied for second. They represented the Natchez area well,” Brooking continued. “It was a great tournament. It was a great field. It was a full field. Bill had a chance at it, too, just like Pete. The tournament was a great success and a great success for the city of Natchez.

“I’d like to thank my sponsors, David Paradise, Bill Burnsed, Visit Natchez, Randy Smith, Tom Graning of Go Mart, and Bill Byrne,” Brooking added. “The Mayor and the Board of Aldermen, because they supported it all the way.

Shawn Munson of McComb, Richard Mathis of Hattiesburg, and Steve Winkel of Oxford finished in a tie for first place in the first flight of the senior division with three-day totals of 24-over-par 237.

In Friday’s first round, Munson appeared to be out of contention altogether with five bogeys and a double bogey that put him at 7-over-par through his first 10 holes. Somehow, he managed three birdies and just one bogey over his final eight holes for a round of 76 and the opening-round lead. That’s because Tim Goad of Long Beach had eight bogeys and only two birdies that put him one shot back at 77. He would finish tied for fifth at 239.

Mathis found opened Saturday’s second round five shots back of Munson, but shot a second-round 77 and was aided by Munson’s 82 and they were tied at 159, only to have Winkel also shoot a round of 77 that had him tied with Goad for first place at 156 going into the final round.

Munson and Mathis each had round of 79 while Winkel struggled down the stretch and finished with a round of 81 to finish tied for first. Winkel had an eagle-2 on the par-4 4th hole, was even par through nine holes and just 1-over through 12 before the unthinkable happened.