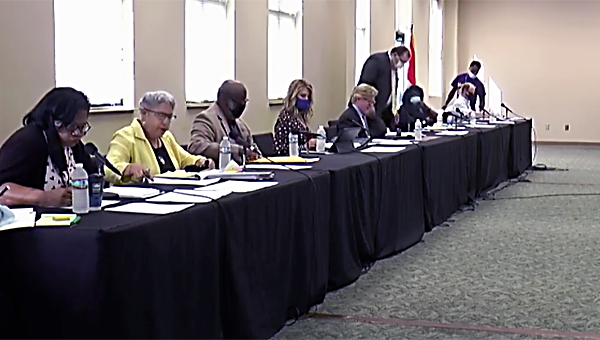 The Natchez Mayor and Board of Aldermen meet Tuesday at the Natchez Convention Center. (Screen grab)

NATCHEZ — Natchez Inc. and the George W. Armstrong Library board are asking the Natchez Mayor and Board of Aldermen to pay a combined total of approximately  $47,000 from the city’s general fund to make up for shortfalls in their budgets due to a decrease in anticipated tax revenue.

The Natchez Mayor and Board of Aldermen took the requests under advisement during Tuesday’s regularly scheduled board meeting without taking any action on the matters.

“I can’t write that check because the city has approved the millage,” Fortenberry said, adding further action from the board is needed to make the payments.

Natchez Mayor Dan Gibson said the city’s revenue was also down by approximately $1 million in the fiscal year ending in 2020 due to the COVID-19 pandemic.

“Obviously the coronavirus has not only had an affect on our tax collections but has also had an affect on the millage amount given to these organizations,” Gibson said. “… Last year we did balance the budget. However, we were $1 million short on our revenue but we managed to balance the budget. We have to be very careful with our dollars under these circumstances. We do have money coming back from MEMA but we are not going to count our chickens just yet.”

In other matters during Tuesday’s regularly scheduled meeting of the Natchez Mayor and Board of Aldermen, the board:

* Voted to rescind a 2017 Request for Proposals for the former General Hospital on Oak Street and to rescind their acceptance of an offer from Magnolia Medical Foundation to renovate the former hospital into a senior living apartment complex.

The motion passed after Gibson broke a 3-3 tie in which aldermen Ben Davis, Billie Frazier, and Felicia Irving voted “nay.”

Natchez City Attorney Bryan Callaway said neither he nor former City Attorney Bob Latham have received any plans from Magnolia Medical or payment of the $5,000 deposit that was required with the RFP.

Gibson said he had met with officials of Magnolia Medical — who have not withdrawn their offer — and presented that “the vast majority of citizens in that neighborhood have expressed opposition” to the project.

* Recognized Sherwin Williams as the Business of the Month.

* Unanimously sponsored Home With Heroes and the Wreaths Across America program with a contribution of $1,500.