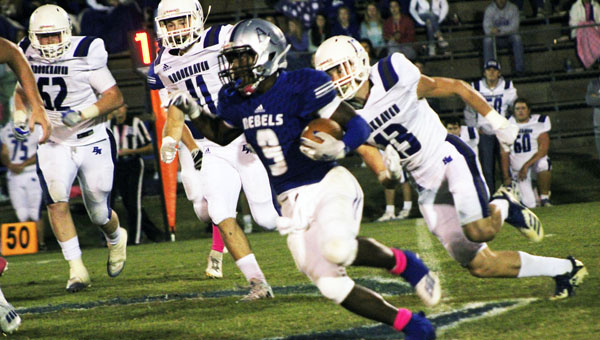 COLUMBUS — Corey Sewell had 28 carries for 156 yards and two touchdowns as the Adams County Christian School Rebels upset the Heritage Academy Patriots 22-20 in overtime Friday night in the semifinals of the 2020 MAIS Class 5A Playoffs.

With the win, No. 3 seed ACCS (10-2) advances to the state championship game and will take on No. 1 seed Leake Academy next Thursday at 7 p.m. at Raider Field on the campus of Jackson Academy.

After a scoreless first quarter, Sewell gave ACCS a 6-0 halftime lead thanks to a one-yard touchdown run with 0:48 left in the second quarter. The two-point conversion pass attempt was no good.

Defending Class 5A state champion and No. 2 seed Heritage Academy (8-3) took the lead on a Wesley Miller six-yard run and Luke Fisher’s extra point with 3:55 remaining in the third quarter.

The Rebels would respond when Blake LaPrairie, who had 90 yards on 13 carries, scored on a four-yard run. Tripp Cotten threw to Terrell Tenner for a successful 2-point conversion pass for a 14-7 lead with 1:58 to go in the quarter.

The Patriots tied the game at 14-all on Mack Howard’s 10-yard TD pass to Mitchell Woodard and Fisher’s extra point at the 11:09 mark of the fourth quarter.

Two key plays by ACCS’s defense in the second quarter on the same drive proved to be pivotal. Heritage Academy had the ball at the Rebels’ 6-yard line when Miller got the ball and was on his way to a touchdown when Claven Dunbar hit him and stripped the ball loose, causing it to go backwards three yards to the 4 before going out of bounds. On the next play, Howard threw a pass in the end zone that was picked off by Jacobus Jackson.

The Rebels held the Patriots to 184 yards of total offense and forced four turnovers. Defensive tackle Kyron Barnes’s interception set up ACCS’s first touchdown drive late in the second quarter. Cotten had an interception and Dantavious Stampley had a fumble recovery.

Sewell had a team-leading seven tackles while Connor Aplin had six tackles and Barnes had five tackles. Dunbar and LaPrairie each had four tackles.