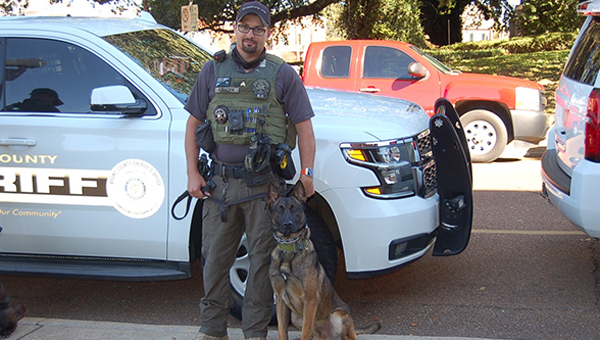 Patten said the department went from having zero K9s in 2016 to now having three. Dubaj, a Malinois, was trained and purchased using an anonymous donation of approximately $20,000 to the department, Patten said.

“Now we’re up to three K9s at the Sheriff’s office, all through donations from the county and a little bit from narcotics. That is huge when we started out in 2016 with not having a single dog and now we’re almost up to having a K9 per shift, which is where I want us to be.”

“Everything was paid for by private donations that we’re extremely appreciative of,” Daughtery said, adding the funds were not solicited. “We had some people come forward and we were able to make it happen.”

Daugherty said both Dubaj and the department’s other K9, Barry, have multiple skills such as bite training, tracking and detecting narcotics.

The department also has a Redbone hound, named Duke, who works with Corporal Chip Mingee and is used specifically for tracking.

Daugherty said Barry is assigned to ACSO’s Special Operations Group with Sgt. Thomas McGinty while Dubaj and Duke would work opposite patrol shifts with Kracek and Mingee.

“With it as tough as it is on law enforcement right now, it is great to have guardian angels in the community who still stand for and with us,” Patten said. “Even though I’m not going to name them but they know who they are and we couldn’t have gotten our K9 unit to where it is without them. Our family here at ACSO greatly appreciates them.”

Also during Monday’s meeting, Patten congratulated three new officers who graduated from the police academy and were added to the force: Cortez Adams, Deselle Davis and Levarious Dorsey.

After the meeting, Maj. Buddy Frank, head of ACSO patrol division, said each of the graduates completed 12 weeks of training.

“It is physical and mental, to the point of making sure that you are able to back up any officer on the street and handle anything that could come at you. That is what it amounts to. I’m happy for these three because there is nothing easy about it. If you don’t want it, you’re not going to make it.”

“We’re not at full capacity yet but we are in the process of hiring to get us up to full capacity,” said Maj. Buddy Frank, head of ACSO patrol division. “We are looking to hire two or three more people and are interviewing and taking applications now to fill those positions.”

* Unanimously approved a MEMA grant application with a local non-profit, the New Hope Community Development Organization, to repair houses that were damaged in Hurricane Delta.

* Unanimously approved advertising for a CDL driver for the Adams County Road Department.

* Voted unanimously to seek bids for repairing two timber bridges that have closed near Anna’s Bottom. Francis Bell, Adams County purchasing clerk, said five contractors were contacted to submit bids on repairing the bridges, however, only one company responded. Officials said by state law any project under $50,000 must have at least two bid proposals.

* Heard bids for a county work truck. Bell said the two lowest quotes submitted were approximately $27,000 and $26,500. The board took the quotes under advisement.