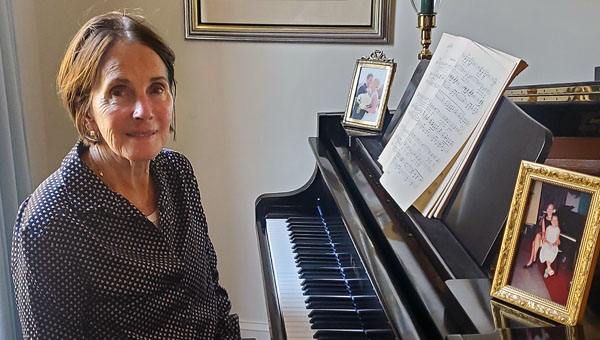 Pat Dickens sits at her piano. (Sylar Wolfe for The Democrat)

Sitting in the family room of Dickens home is a large, black K Kawai piano.

“It is lovely and makes such a wonderful sounds,” Dickens said. “I’m not much of a piano player myself, but I have always loved the instrument.”

Dickens’ late husband George Dickens, who died in May 2019, bought her the piano more than 20 years ago.

Dickens was returning to her Duster Drive house Thursday afternoon after eating lunch when The Dart landed there.

Dickens said her love of music came to her at a young age.

“I grew up singing,” Dickens said. “I would sing in school and in the church choir. I just loved to sing.”

“It has a beautiful and rich sound to it,” Dickens said.

Dickens said she wanted her children to play the piano when they were growing up.

“The piano is such a beautiful instrument,” Dickens said. “I thought it would be a good activity for them.”

Dickens said her children made their children play as well, continuing to pass down her love of music. One of Dickens’ granddaughters switched from piano to the harp, and currently plays in the Symphony Orchestra at Texas Christian University.

“Harp players are hard to come by,” Dickens said.

Dickens moved from Nashville, Tennessee, to Natchez 17 years ago with her late husband.

Dickens said they found out about Natchez after their son married a woman from Natchez.  Dickens said when they visited Natchez they loved the people and friends they made.

“Natchez exudes warmth and is welcoming.” Dickens said. “The people here are kind and welcome you in with open arms.”