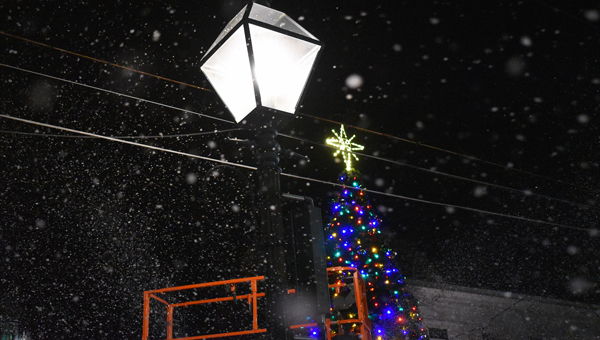 Snow from a snow machine falls on the newly lighted Christmas tree last year in downtown Natchez. This year's tree lighting will be Saturday night. (File Photo, The Natchez Democrat)

NATCHEZ — Christmas in Natchez begins this Saturday, Nov. 28, with the annual Lighting of the Christmas Tree at Main and Commerce streets followed by the annual Natchez Christmas Parade on Dec. 5.

Both events will start at 6 p.m. each Saturday.

To help safeguard the health of spectators and participants from COVID-19, this year’s festivities will be celebrated differently.

During the parade, Santa will be wearing his mask and will not be throwing candy or beads, Natchez Mayor Dan Gibson said in a press conference Tuesday.

Tony Fields, a Natchez musical talent, will be leading Christmas carols at a shortened version of the tree lighting.

Participants and volunteers will be holding signs encouraging people to social distance and wear masks. Community volunteers may sign up by contacting Brian Marvel at Natchez City Hall, 601-445-7500, Gibson said.

Both events also will be live streamed on social media while virtual attendance is encouraged, he said.

Gibson said some people had expressed concern about hosting Natchez’s traditional Christmas gatherings with local virus cases on the rise.

“Be kind,” Gibson said of those who will be attending the events. “Some people are upset about the rules, then there are those who want us to cancel. A word to the Grinch, Christmas is continuing and we’re going to be doing it the right way.”

Natchez Police Chief Walter Armstrong said the fact that the events will be outside allows people to be safer and socially distance.

“We are asking the public to help us keep them safe,” Armstrong said, adding law enforcement officers would be at the events.

Interim Natchez Fire Chief David Freeman also asked people who attend to “help themselves and help others” by doing their part to prevent the spread of COVID-19.

A unity concert is also scheduled take place Dec. 11 at the Natchez City Auditorium, which features a renowned pianist, Eric Genuis, who showcased his talents on the Broadway Street bandstand in October.

The event will also be live streamed while in-person attendance is limited to 200 people who will be separated into family groups, Gibson said.