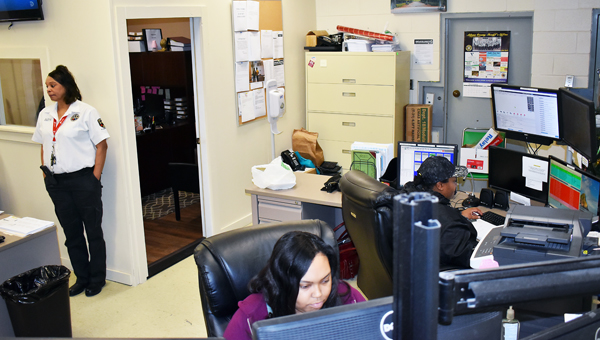 Annette Fells, left, stands in the Adams County E911 dispatch office in the basement of the Adams County Sheriff's Office building, while Alexus Brown and Yvette Grant and Sara Davis (not pictured) work at their stations. (Democrat file photo) 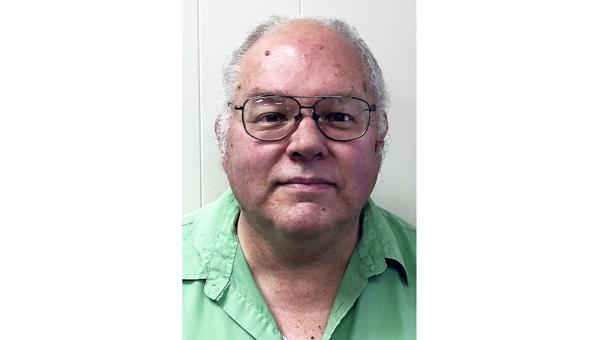 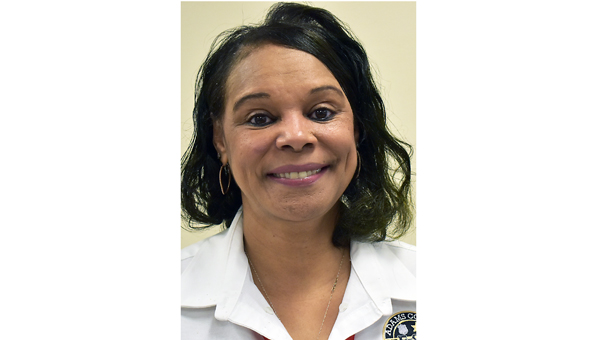 NATCHEZ — Benny Jack Campbell waited on the line two minutes with the Adams County E911 dispatch to be transferred to an ambulance service.

That two-minute wait time, however, seemed like five minutes, Campbell said, while his mother lay unresponsive on the kitchen floor of their Kingston home.

Adams County E911 Director Annette Fells said it is not uncommon for people’s perceptions of time to become skewed when they are experiencing emergency situations, such as the one Campbell experienced and the many others the E911 department deals with daily.

The department’s mission is to save lives, and to accomplish that mission Fells said 15 dispatchers rotate 12-hour shifts to take incoming emergency calls and dispatch them to the proper agencies.

Adams County E911 operates as an independent agency under the Adams County Board of Supervisors, Fells said, and the department strives to help people with any kind of emergencies they are experiencing.

Campbell’s experience is just one example of the types of emergencies the E911 department handles every day.

Campbell immediately dialed 911 and told the dispatcher his mother had fallen and he needed an ambulance, he said.

Campbell held the telephone as instructed but said he could hear the dispatcher talking to someone else saying she could not make the telephone connect to the ambulance company.

After holding for what seemed to Campbell to have been five minutes, Campbell said, he was connected to a representative of AMR ambulance service, who took his information and gave him instructions until the ambulance arrived a short time later.

Fells played a tape of Campbell’s 911 call, which shows Campbell’s transfer to the ambulance service actually took two minutes rather than the five minutes he estimated.

Fells said the two minutes to transfer the call to the ambulance service is longer than it should have taken.

“It doesn’t take that long all the time,” Fells said, adding a new transfer box had recently been installed on the dispatcher’s station, and it did not work properly that afternoon, which is why Campbell could hear the dispatcher telling a colleague she could not make it connect.

Fells said the box, which contains a button to switch computer screens to allow the dispatcher to call the proper agency, is corrected now.

“I had her lying on her left side…” Campbell said, before he was instructed to put her on her back. “She was still breathing but did not seem to hear me.”

Once the ambulance arrived, the Emergency Medical Technicians told Campbell it appeared his mother had suffered a stroke.

“They loaded her into the ambulance, and both workers got into the back of the ambulance with Mom,” Campbell said. “After about 10 minutes, one lady came out and told me they had to leave.”

The ambulance left at approximately 2:30 p.m., Campbell said, to take his mother to the hospital.

“A scan showed swelling and bleeding in her brain that caused the stroke,” Campbell said. “…the stroke was so severe that Mom died around 10 p.m. that night.”

Campbell said he did not believe the lag time in the 911 call played a factor in his mother’s death, which he said he believed was inevitable after the stroke.

Fells said, despite the glitch with the transfer switch, her dispatchers followed proper procedures in handling the call.

“Our operation’s mission is to get help to citizens and to save lives,” said Fells, who has served as director of Adams County E911 since March.

In 2017, Adams County consolidated E911 operations into an independent department to dispatch all of the incoming 911 calls from Natchez and Adams County.

Fells said she works constantly to improve operations and procedures with the dispatchers, who work 12-hour shifts and rotate to ensure that three dispatchers are on duty 24-hours a day seven-days a week.

Fells, who has 22 years experience as a dispatcher, including 16 years with the Natchez Police Department, said she fills in when someone is sick or on holidays as needed.

Fells said she trains new dispatchers to keep callers reporting emergencies in progress on the line even after the proper law enforcement or agency has been dispatched.

“There is no way you can go wrong keeping the caller on the line,” Fells said. “You can hear what transpires, know if there is a suspect, a victim or a vehicle description.”

Then, the dispatcher can type that into a computer log and relate that information via radio to the responding agency so they will know what to expect when they arrive.

Fells said she holds monthly training sessions with her staff to go over issues that need improvement and to share best practices learned from mistakes.

Anyone with emergencies should call 911 for help, including fires, crimes, medical emergencies or wrecks, Fells said.

“I want everybody to know I have an open-door policy,” Fells said, adding she welcomes anyone to call her at 601-442-3930 with questions, observations or complaints so she can address those issues.