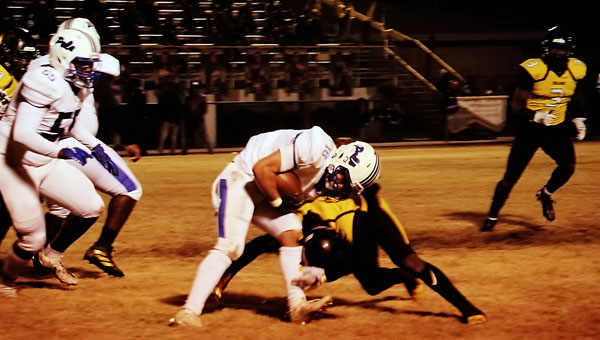 Major collision as Ferriday's No. 5 Kobe Johnson stops a Port Allen runningback for a short gain. (John Larson, For The Democrat)

FERRIDAY — The Port Allen Pelicans (6-2) football team defeated the Ferriday High School Trojans (6-2), 22-20, Friday night in the second round of the district 2A LHSAA playoffs.

Pelicans quarterback Jacoby Howard ran for a 55-yard touchdown on the second play of the game. Howard would throw for another score giving him two total touchdowns for the game.

The Pelicans’ defense stepped up in the first half, holding Ferriday’s high-powered offense to just six points.

Pelicans cornerback Stephen Springer intercepted a Ferriday pass and returned it 97 yards for a touchdown, which put the Pelicans up 22-6 at the half.

Ferriday scored once in the third quarter and again early in the fourth quarter, which brought the Trojans to within 2 points of the Pelicans 22-20, where the score remained until the end of the game.

Ferriday head coach Stanley Smith said he is proud of his team.

“We came out and fought hard,” Smith said. “We finished the game, and the balls just didn’t bounce the way we wanted them to. That’s just the way the cookie crumbles sometimes.”

Smith also said he was confident his team would still have future success.

“We got to go back and get into the weight room,” Smith said. “We have to buy in and sacrifice for the sake of the program.”

The Pelicans defense gave up points in the second-half but stepped up when it mattered.

Port Allen cornerback Jeremiah Dehon made a big interception with 2:37 left in the fourth quarter.

“I saw my man go in motion,” Dehon said. “I knew they were trying to hit the flats because they needed to get out-of-bounds to stop the clock. When I saw that, I jumped the route.”

The Port Allen Pelicans move on to the next round of playoffs where they will face the Mangham Dragons (10-0).