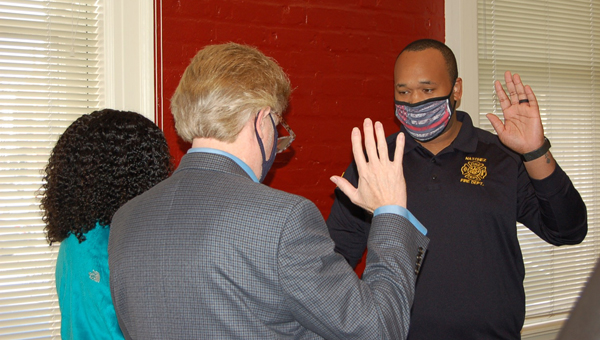 Robert Arrington is sworn in as the new Natchez fire cheif during a Friday special-called meeting of the Natchez Mayor and Board of Aldermen at City Hall. (Sabrina Robertson / The Natchez Democrat)

NATCHEZ — Former Battalion Chief Robert Arrington was appointed to take the helm of the Natchez Fire Department as the new fire chief on Friday.

“I have been in a leadership role for a very long time — 12 of my 16 years. Since we’ve had an opening for a new fire chief, I thought this was the time to step up and see if I can’t help the department more going forward.”

In a special-called meeting Friday of the Natchez Mayor and Board of Aldermen, the board voted unanimously to hire Arrington to be the new fire chief.

The search for a fire chief began before former chief Ventris Green retired Aug. 31 after 22 years with the Natchez Fire Department.

David Freeman, a 38-year veteran of the department, filled the role as interim fire chief until the board hired Green’s replacement.

Natchez Mayor Dan Gibson said the search for a fire chief had been narrowed down to Arrington and two other candidates who were interviewed by the board Tuesday.

“We had three outstanding finalists for the position of fire chief,” Gibson said, adding his thanks to others who applied for the position and to Freeman for having served as chief for the past three months.

“This has been a long time coming and I’m excited,” Arrington said of being named fire chief. “I’ve been with the department 16 years and have been a part of most of our big events in the past 16 years. I’m happy to get this opportunity.”

Going forward, Arrington said he hopes to improve the city’s fire rating, make improvements at the fire stations and boost the morale of the firefighters.

“Chief Freeman has been awesome and has taught me a lot … chief Green the same,” Arrington said after being named chief. “When I made battalion chief, (Green) was helpful in teaching me the things I needed to know and prepared me for today.”