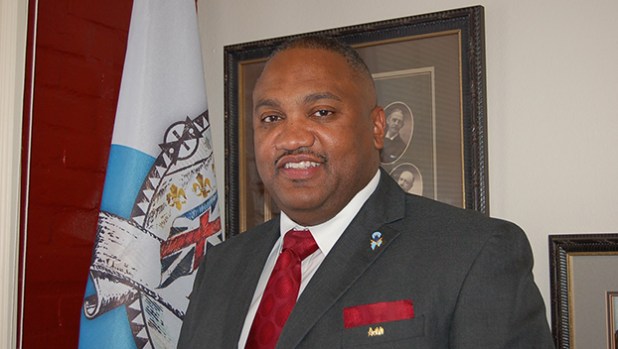 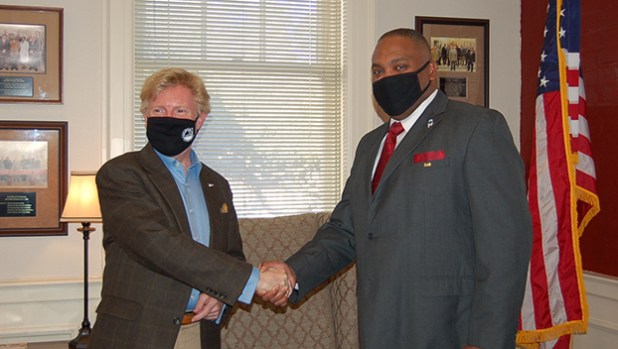 Natchez Mayor Dan Gibson shakes hands with Joseph Daughtry after the Natchez Board of Aldermen hired Daughtry to be the chief of the Natchez Police Department Wednesday. (Sabrina Robertson / The Natchez Democrat) 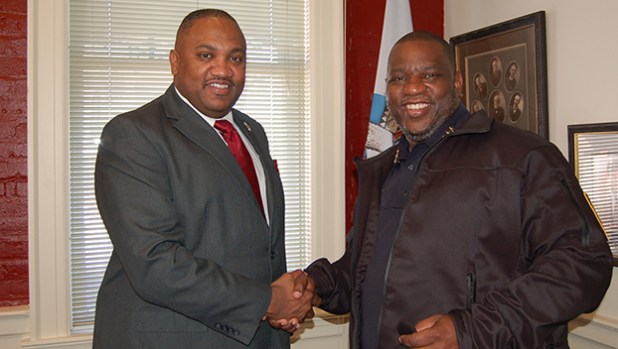 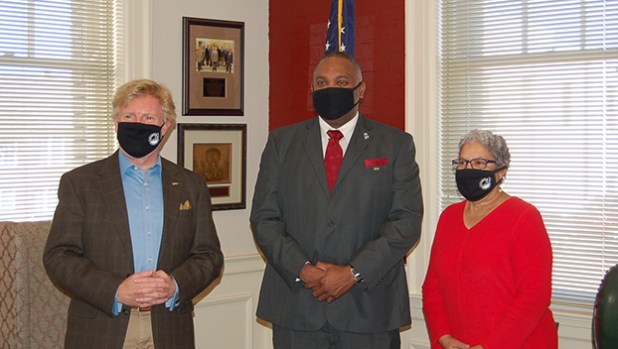 NATCHEZ — The Natchez Mayor and Board of Aldermen hired Joseph M. Daughtry Sr. to take the helm of the Natchez Police Department as the new chief during a special called meeting Wednesday morning.

Natchez Police Chief Walter Armstrong, who announced in August that he would retire by the end of the year, will stay on as chief while Daughtry makes the transition, Daughtry said after the meeting.

Daughtry currently serves as chief of the Pelahatchie Police Department and is the second vice president of the Mississippi Association of Chiefs of Police.

“We have an outstanding, qualified candidate here who is just the one to step into the footsteps of someone who has been as great as Walter Armstrong and to keep our city going,” Gibson said.

Daughtry said he felt humbled by city officials’ praise and the city’s decision to hire him as police chief. Daughtry asked for the city’s prayers and support.

“As the Bible says, in order to have friends, you must first show yourself friendly,” Daughtry said. “I appreciate all of those kind words and, Mayor and Board of Aldermen, I’m also going to need your prayers and your support. We’ve got work to do, and we’re going to get it done.”

The Board of Aldermen voted 4-0 to hire Daughtry to be the next police chief in Wednesday’s meeting with Alderman Felicia Bridgewater-Irving absent and Alderman Billie Joe Frazier abstaining.

Frazier had objected to the hiring process before the board went into executive session to interview four candidates on Tuesday.

In a phone call after Wednesday’s meeting, Frazier said he opted not to participate in the selection of the police chief and the interviews because he did not agree with the process that was used to vet those who applied for the position.

Gibson said a total of 36 applications were submitted for the position and the Natchez Civil Service Commission chose the most qualified of those candidates to submit to the city’s police committee, which includes Alderwoman Sarah Carter-Smith, Alderman Ben Davis and Bridgewater-Irving.

Gibson said the police committee interviewed and chose four of seven applicants that were submitted to the aldermen by the Civil Service Commission to be interviewed by the Board of Aldermen in Executive Session after their regularly scheduled meeting Tuesday.

Gibson declined to give any information about the other finalists.

“We consider (the names of applicants) to be part of the confidentiality involved in hiring decisions,” he said.

Gibson said the five aldermen who interviewed Daughtry on Tuesday expressed their confidence in Daughtry after the interview.

Frazier said, “I have nothing against any of the applicants,” adding he only disagrees with the process that was used to select the four finalists.

Gibson said each one of Daughtry’s references, including current and former sheriffs and a Rankin County supervisor, approved of Daughtry as police chief.

“One of those references said if we (the board) did not hire Daughtry we ‘would be missing out on the hire of a lifetime,’” Gibson said.

In August 2019, Pelahatchie Mayor Ryshonda Beecham reportedly suspended Daughtry with pay for insubordination. However, the Pelahatchie Board of Aldermen ultimately reinstated him.

Gibson said he spoke with Daughtry and his references about the incident at length and said Daughtry “took a valiant stand for the well-being of his officers” during a political dispute that prevented them from receiving paychecks.

“There was a dispute between the mayor and (the Pelahatchie) Board of Aldermen and we felt like he was standing up for his men,” Gibson said. “We’re grateful that his record shows the Board of Aldermen stood behind him in that and those officers were rightfully caught up on their pay.”