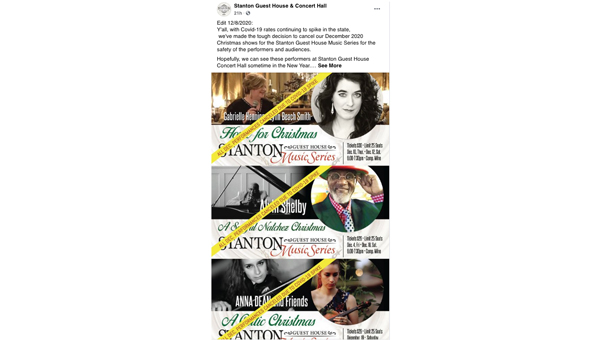 NATCHEZ — Stanton Guest House & Concert Hall announced Tuesday all of the venue’s December performances have been cancelled due to the spike of COVID-19 cases in the state.

Stanton Guest House & Concert Hall, owned by Natchez Mayor Dan Gibson and located at 411 North Commerce St. in Natchez, had a holiday concert series planned through the month of December, including Gabrielle Henning and Lynn Beach Smith with their show called “Home for Christmas,” Alvin Shelby with “A Soulful Natchez Christmas” and Anna Dean and Friends with “A Celtic Christmas.”

The cancellation was announced in a social media post Tuesday.

“Y’all, with Covid-19 rates continuing to spike in the state, we’ve made the tough decision to cancel our December 2020 Christmas shows for the Stanton Guest House Music Series for the safety of the performers and audiences,” the post states. “Hopefully, we can see these performers at Stanton Guest House Concert Hall sometime in the New Year. In the meantime, please wear a mask in public, observe 6 ft. social distancing, wash those hands, and keep safe this holiday season. God bless you.”

Gibson, who often performs at the venue, said the Stanton Guest House & Concert Hall continued to host performances well within Centers for Disease Control and Prevention Guidelines up until the Gov. Tate Reeve’s announced Adams County was added to the list of counties under the Safe Return Order on Dec. 1.

The governor’s executive order imposes a mask mandate and gathering limitations on certain counties in the state.

While Adams County is under the executive order, masks or face coverings are mandatory in all public spaces where social distancing of 6 feet or more is not possible except where food or drink is being consumed; facial ID or visibility of the nose or mouth is needed; or if a person is engaging in physical exercise, public speeches or performances.

“I have a ballroom that seats 50 and at the last concert I had only 10 people and everyone was wearing masks and socially distanced,” Gibson said. “At the time that was well within (CDC guidelines) and now that Natchez has been added to the governor’s order we’re having to revisit everything.”

Gibson said he remains committed to keeping Natchez’s economy open to the extent possible and encourages social distancing, mask wearing and sanitizing in order to do so.