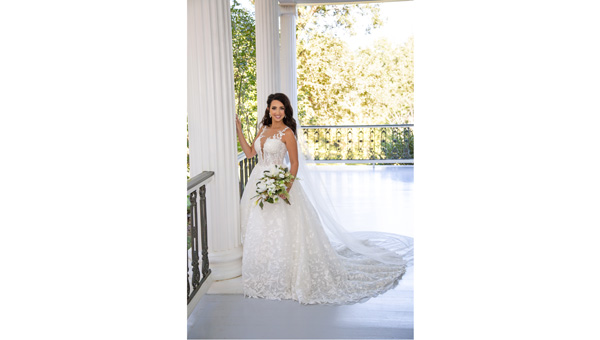 The bride is the daughter of Mr. and Mrs. Sammy Rogers of Ferriday, Louisiana. The groom is the son of Dr. and Mrs. Kevin Andry of Baton Rouge, Louisiana. The wedding was held on the steps of Brandon Hall Plantation while music was performed by a string quartet. During the ceremony Tamara Moree Hamilton read Proverbs 3; (1-6). Kyle David Andry read 1 Corinthians 13. “Amazing Grace” and “A Thousand Years” were sung by Christi Alexandra Manshack accompanied by Dr. Kevin Michael Andry. A hornpipe was played for the recessional.

The bride and father were carried in a white horse drawn carriage to the front of the Brandon Hall grounds where her father escorted her to the plantation steps. She wore the couture wedding gown “Haven” by Japanese designer Yumi Katsura featuring a deep v-neck embellished with Guipure floral lace and an Italian illusion back with floral appliqués.

Her ball gown was customized with a basque waist line to accentuate Jessica’s small frame; Jessica had volume added to the skirt that made her feel like an elegant Southern Belle. She also had the sleeves removed and her gorgeous lace train had a French bustle so that she could have the freedom to dance the night away. A cathedral length English glitter tulle veil completed Jessica’s bridal look.

She carried a bouquet of little gem magnolias with white freesia, white ranunculus, and natural evergreen foliage of seeded eucalyptus and pine. An Andry family heirloom rosary dangled as she carried her bouquet.

For her daughter’s wedding Mrs. Rogers wore a champagne floor length evening gown of crunchy style sequins, a gathered middle, bateau neckline, and a cowl back. Mrs. Andry, the bridegroom’s mother, chose a navy sequined floor length evening gown of sequins, with a round neckline and scoop back. The bride’s grandmother, Mrs. Barbara Moree, of Ferriday, Louisiana, wore a gold and turquoise lace top featuring a white shell underlay and gold slacks. Each was presented with a corsage of evergreen foliage with white ranunculus.

After a honeymoon in Tulum, Mexico, the couple makes their home in Baton Rouge, Louisiana. 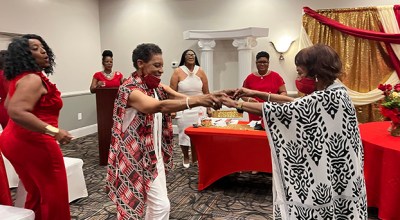 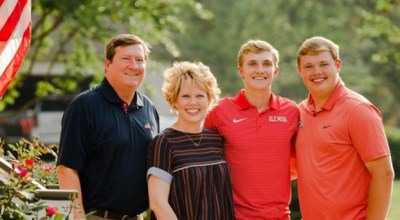 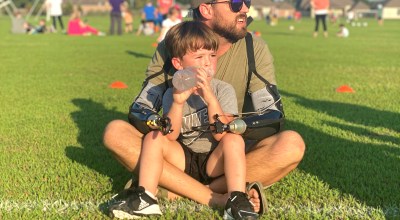 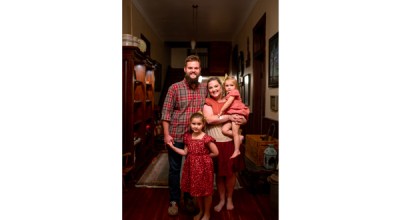