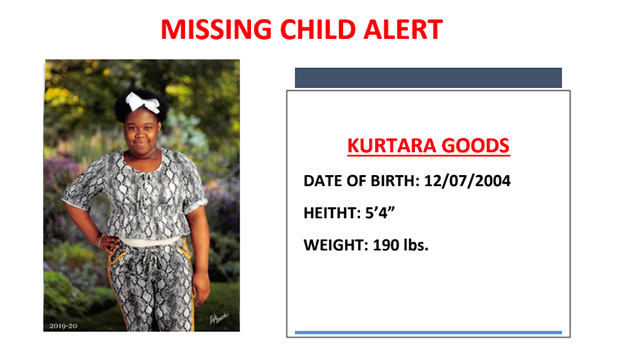 NATCHEZ — Law enforcement agencies are in search of a 15-year-old girl from Natchez who has been missing since October.

Natchez Police Chief Walter Armstrong said Kurtara Goods, 15, was reported missing to the National Crime Information Center in October and other agencies have since sent out a news release and photo to help locate her.

“We’re trying to put an end to her disappearance,” Patten said. “(NCIC) sends this information out to every law enforcement agency. That was done. When they do that, it is only members of law enforcement seeing it. I wanted it out so that it isn’t just law enforcement looking for this young lady. Eighty-two eyes versus almost a million is a big difference.”

Goods was last seen wearing jeans and a red shirt on Sept. 30, 2020, in Natchez and later in McComb on October 7, 2020, the news release from Adams County Sheriff’s Office states.

She is 5-feet, 4-inches tall and weighs approximately 190 pounds, the news release states.

Goods has no tattoos or scars and wears her hair in shoulder-length braids.

Armstrong said anyone with information regarding her whereabouts can contact any law enforcement agency and the Natchez Police Department would be notified.

Adams County Sheriff Travis Patten said he asked Goods’ family to release her photo and description to the public.