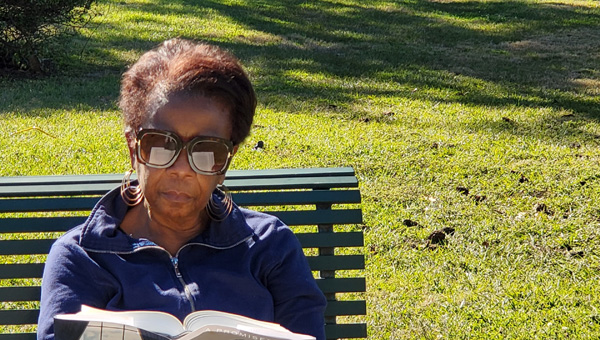 Patricia West sits on a park bench reading a book on Wednesday in downtown Natchez. (Skylar Wolfe, The Natchez Democrat)

NATCHEZ — In her retirement, Patricia West said she enjoys reading, writing, spending time with her family and being outside enjoying the beauty that Natchez has to offer.

A retired English teacher and librarian, West worked at several schools in the Natchez education system for more than 35 years.

West sat on a park bench near Bontura Alley in downtown Natchez when The Dart landed there Wednesday afternoon reading a book and enjoying the views.

West said she was born in Natchez.

“My parents met here,” West said. “My mother came here for school and met my dad. They eventually got married and had me.”

West said she left Natchez to attend the University of Mississippi where she earned her degree in English. After West graduated, she said she traveled to Chicago, Illinois, where she worked as a librarian.

West said she returned to Natchez after getting married, traveling and living in several different cities.

“When I came back here to Mississippi, I began teaching at Natchez high school,” West said. “I have taught at Co-Lin and Alcorn State as an adjunct professor. I retired here [Natchez] after my husband became ill. After he passed away I worked at Vidalia High School for about 11 years until I retired in 2017.”

West said reading and writing help her fill the days.

“I read every day,” West said. “I love coming down here [to the bluff]. I try to walk every day. The scenery and greenery is just good for me.”

“I see all kinds of people, people I know, people I don’t know, students I have formerly taught,” West said.

West has three children and four grandchildren and when possible she spends a lot of time traveling to Texas to visit, she said.