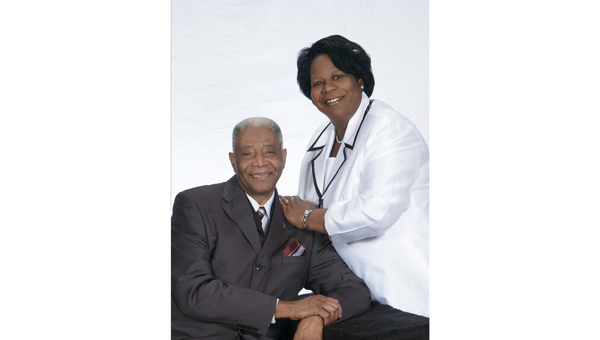 Sam Porter poses with his wife Gloria Washington-Porter before his death in May of COVID-19. (Submitted Picture)

NATCHEZ — The Rev. Sam Frances Porter “completed his assignment on Earth” on May 1 after a lengthy battle with COVID-19, said his wife, Gloria Washington-Porter.

Gloria said her husband of 14 years “seasoned well” and kept his age a secret, which she now keeps for him.

“He never wanted anyone to know his age and that was one thing that I made sure of when I was making the funeral arrangements,” she said. “I honored that wish. He never wanted to be called old.”

Sam came to Pilgrim Missionary Baptist Church in Natchez from New Orleans after Hurricane Katrina, where he met Gloria and became associate minister. One year later, Sam and Gloria were married.

“He was active in the church,” White said. “When he became a pastor he stayed on as associate minister. … He always had good stories to tell that would make you laugh and keep you motivated.”

“I called him Sam Cooke because to me that is who he sounded like,” White said. “I will always remember how he could dance. When he was happy, he would break loose and start dancing. He had some great moves. I will miss his friendship and also his pastorship as an associate minister. He always made himself available to me whenever he was needed.”

When Sam died, he left behind his wife, four daughters, a son, 12 grandchildren and seven great-grandchildren, as well as other family, friends and a congregation who loved him deeply, Gloria said.

Rosie Sweazer, a member of Wendy Hill Baptist Church, said Sam was “full of love” for his congregation, which was returned to him tenfold.

“He was full of love and full of life and a great teacher,” she said. “When he preached, he was going to give you the word. He would always say, it is not what Sam says. It is what the word says. First he showed you what the word says and then he would make you read it and whatever he talked to us about he explained. He would dissect it from beginning to end.”

Gloria said in addition to Sam being missed by the church, he left his 9-year-old dog Neyo, who died shortly after to be with him.

“We both spoiled Neyo but I guess Neyo loved Sam more and grieved himself to death,” Gloria said. “Sam used to walk him every day and on their last walk Sam left his walking shoes by the front door. When Neyo died, we buried Sam’s walking shoes with him so they could keep walking together.”

Sam became sick with COVID-19 in April, Gloria said. He was diabetic and seemed to be doing well until he spent his last 18 days of life at Merit Health Natchez, she said.

“The hardest part was the waiting and not being able to be with your family,” she said. “That was the first time Sam had been hospitalized that I couldn’t be there with him. … The last time I talked to him was the Monday before he died. He went on the ventilator and he passed on Friday.”

Gloria said she was grateful to Dr. Christopher Martin, who called her personally to deliver the news that Sam had died.

“That is a call you can’t explain,” Gloria said. “It is unreal. You stay hopeful and prayerful and then you get that call. You question things at first and then you realize his assignment was done on Earth. It was time for him to get his wings.”

Editor’s note: This story is part of a series highlighting the lives of those members of the Miss-Lou community who fell victim to COVID-19 and lost their lives, or whose death was hastened because of the virus. If your loved one passed away after suffering from the COVID-19 virus, we would like to write about their life and your loss. Please contact Scott Hawkins at 601-445-3540 or email him at Scott.Hawkins@natchezdemocrat.com.

Ask me about the Symphony